The Browns waived wide receiver Jordan Leslie with an injury designation. As reported yesterday, the Browns have filled his spot by signing wide receiver Bryce Treggs off of the Eagles’ practice squad. 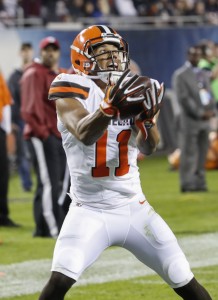 Leslie went down with a hamstring injury in Sunday’s game against the Bengals. He was a preseason standout for Cleveland who missed the initial 53-man cut, but he was brought back into the fold weeks later. It’s not immediately clear whether Leslie might be able to return after eight weeks on the sidelines, as permitted by the league’s rules.

Leslie was a featured player at UTEP for three seasons before transferring to Brigham Young in 2014. As a senior there, he posted a career-high 55 catches to go with 779 yards and six touchdowns.

Treggs, a second-year pro out of Cal, first entered the league as a UDFA with the Niners in 2016. He later hooked on with the Eagles and had three catches for 80 yards in nine games.