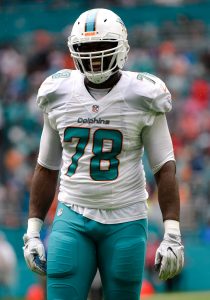 Buffalo already has a good deal of depth on the edge, as the team signed former Redskins pass rusher Trent Murphy earlier this offseason, adding him to a rotation that also includes Jerry Hughes and Shaq Lawson. Fede, then, isn’t likely to see much time as a rotational option, but the Bills should be familiar with what they’re getting. As Armando Salguero of the Miami Herald notes (Twitter link), former Dolphins general manager Dennis Hickey drafted Fede in 2014, and now works in Buffalo’s scouting department.

While Fede has never started a contest during his four-year career, the 26-year-old does offer 51 games of reserve experience. In 2017, Fede played on just 16% of Miami’s defensive snaps, but saw action on a whopping 75% of the club’s special teams snaps. In total, Fede — a former seventh-round pick — managed seven tackles and one fumble recovery a season ago.

Agent Drew Rosenhaus, in New Orleans as the Steelers prepared for tonight’s preseason game against the Saints, discussed wide receiver Antonio Brown‘s contract with Pittsburgh general manager Kevin Colbert, tweets Ed Bouchette of the Pittsburgh Post-Gazette. Brown, who has two years left on his deal, has been requesting a new contract for some time, but the Steelers have been insistent that they won’t negotiate right now. Universally considered an elite pass-catcher, Brown is ranked 18th among wide receivers in terms of average annual compensation ($8.4MM/year).