The Raiders worked out running back Charcandrick West, a source tells Ian Rapoport of NFL.com (on Twitter). As previously reported, the club also worked out fellow running back Robert Turbin on Thursday, but Rapoport hears that both players will be in wait-and-see mode until after the draft.

West, 28 in June, enjoyed his most productive campaign in 2015, when he managed 160 carries for 634 yards and four touchdowns. In 2016 and 2017, however, his rushing role with Kansas City declined. While he played more than 500 offensive snaps from 2016-17, West handled only 106 total carries in that span. Last year, he hooked on with KC towards the end of the year, but had only two carries for -1 yard.

The Chiefs are set to sign running back Charcandrick West, sources tell Ian Rapoport of NFL.com (on Twitter). West, of course, offers familiarity with the Chiefs’ system and should be able to hit the ground running.

West worked out for the Chiefs alongside C.J. Anderson, who rushed for more than 1,000 yards with the Broncos last year. Anderson would have represented a splashier addition, but West got the nod for his experience in Kansas City’s offense and special teams acumen, Josina Anderson of ESPN.com tweets. At the same time, Anderson had a “really good workout,” according to Rapoport, so he could be an option for the Chiefs if he’s needed.

The Chiefs turned to Spencer Ware as their replacement for Kareem Hunt, but he amassed only 47 yards on 14 carries against the lowly Raiders on Sunday. If Ware doesn’t impress in practice this week, he could quickly wind up in a timeshare with West, who was a member of the Chiefs from 2014-2017. 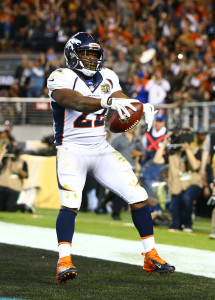 With Matt Breida unlikely to suit up for Monday’s game against the Packers, the 49ers auditioned several running backs today. Veteran NFL reports Howard Balzer reports (via Twitter) that the team worked out Matthew Dayes, Andre Ellington, Jeremy McNichols (as was reported yesterday), Shane Vereen, and Charcandrick West. The 49ers ended up adding Dayes to their practice squad.

While Breida was able to avoid a high ankle sprain, he’ll likely miss Monday’s contest. With Jerick McKinnon already out for the season, this leaves the 49ers with a pair of healthy running backs: Alfred Morris and Raheem Mostert. Head coach Kyle Shanahan said the team could end up promoting Jeff Wilson from the practice squad for some extra depth, or maybe they’ll look outside the organization for reinforcement.

Breida has stepped up during McKinnon’s absence, compiling 369 rushing yards and one touchdown on 49 carries. His 7.5 yards per attempt is currently the best mark in the NFL, and he’s yet to commit a fumble this season. On the flip side, Morris and Mostert have been underwhelming, combining for 3.5 yards per carry.

The team may be willing to ride it out with Morris as their starting running back, especially since the majority of the auditionees have served as third-down backs throughout their careers. Vereen was the most productive in 2017, as he hauled in 44 receptions for 253 yards (he also had another 164 rushing yards on 45 carries). West finished last season with 27 receptions in 13 games with the Chiefs, while Ellington had 39 receptions during his stints with the Cardinals and Texans.