Former Chiefs great Jamaal Charles says he has “probably” played his final down of football. In a post on Instagram, Charles hinted strongly at retirement. 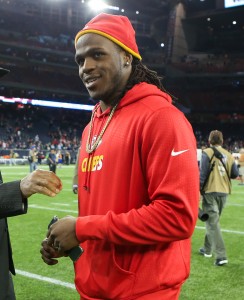 “I’m so thankful and grateful,” Charles wrote. “Thanks Jaguars for opportunity. It probably was my last chance putting on a jersey again.”

Charles was once one of the NFL’s most electrifying running backs. When he was young, healthy, and a member of the Chiefs, he had some brilliant seasons in Kansas City, including a 2010 campaign in which he ran for 1,467 yards and averaged 6.4 yards per carry. Unfortunately, time is not kind to running backs, and he has not topped 1,000 yards since the 2014 season due to aging and injuries.

This year, Charles hooked on with the Jaguars to help fill in for the injured Leonard Fournette. However, after the acquisition of Carlos Hyde, he was no longer needed. He’s technically a free agent, but it doesn’t sound like Charles will be seeking work.