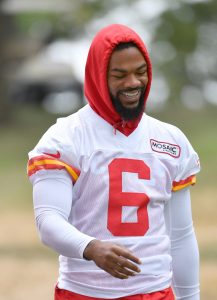 After going undrafted out of Oklahoma State during the 2017 draft, Lampkin quickly caught on with the Chiefs. After a stand-out rookie minicamp, there was some optimism that the 24-year-old would end up making the active roster. Unfortunately, the 5-foot-11, 181-pound cornerback ended up tearing his ACL, and he spent his entire rookie campaign on the injured reserve.

Lampkin was still dealing with the injury throughout the offseason, and Kansas City ended up moving on from the defensive back in August. Since being waived, Lampkin has only had a single workout, which came with the Texans earlier this week.

The Browns could certainly use some help at cornerback, especially with E.J. Gaines and Terrance Michell currently on the injured reserve. The team recently added Phillip Gaines and Juston Burris to the active roster, with the duo joining Denzel Rice and Tavierre Thomas as Cleveland’s backup corners.