Kony Ealy‘s Oakland stay did not last long. Signed to start last week, the veteran defensive end is now off the team after the Raiders made the decision to waive him Tuesday, Field Yates of ESPN.com tweets. 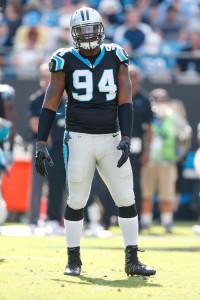 Ealy was a healthy scratch against the Chargers. Unlike when the Cowboys cut him earlier this year, he’ll head to waivers. The former Panthers second-round pick played in at least 15 games in each of his first four seasons; he’s yet to see action in 2018.

The Raiders have signed numerous outside free agents this season. Many have not worked out. The team has, however, given significant playing time to rookies P.J. Hall, Arden Key and Maurice Hurst, which makes sense in what quickly became a rebuilding year. Ealy, though, joined Johnathan Hankins and Clinton McDonald as in-season D-line additions.

Ealy spent three seasons with the Panthers and last year with the Jets. But over the past 15 months, the Patriots, Cowboys and now Raiders have cut him.

The Raiders are expected to sign free agent defensive end Kony Ealy to a one-year deal, sources tell Ian Rapoport of NFL.com (on Twitter). Ealy, 27 in December, has been out of work since being released by the Cowboys on Labor Day weekend. The Raiders also signed defensive end Jacquies Smith, per a club announcement.

Ealy hooked on with the Jets last year after being cut by the Patriots and proved to be a quality addition. While he didn’t light up the stat sheet in New York, he graded out as the No. 61 edge defender in the league. The Chargers, Dolphins, Falcons, and Bengals all looked at him in the fall, but he left each audition without a contract.

Smith had a combined 13.5 sacks over his first two NFL seasons with the Buccaneers in 2014 and 2015. Unfortunately, a torn ACL in 2016 has kept him off the field for much of the last three seasons.

Predictably, the Raiders’ pass rush has struggled since the Khalil Mack trade. The arrival of Ealy and Smith will not fill that void, nor will it address the Raiders’ issues in every other facet of the game.

After getting blown out by the Nick Mullens-led 49ers, the Raiders will face the rival Chargers on Sunday. If active, Ealy and Smith will provide support behind Frostee Rucker, Arden Key, and Fadol Brown.