On Wednesday, the Seahawks signed linebacker Dekoda Watson. The indefinite ban of wide receiver Josh Gordon freed up a roster spot, so no cuts were needed to add the veteran defender. 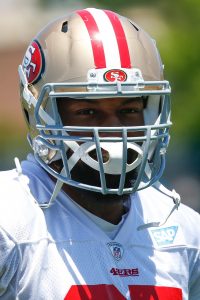 Watson, 31, had a brief run with the Seahawks earlier this year. He was dropped before he could even play in a game, however, to make room for Gordon’s arrival off waivers.

Watson’s hasn’t seen live action since he suited up for the 49ers last year. In 2018, he played in four games and finished out with five tackles and two sacks.

The nine-year pro has also played for the Broncos, Patriots, Cowboys, Jaguars and Buccaneers over the course of his career. He’ll rejoin the Seahawks with an eye on making a difference in the final two games of the regular season and the playoffs.

END_OF_DOCUMENT_TOKEN_TO_BE_REPLACED

The Broncos have released veteran outside linebacker and special teamer Dekoda Watson, sources tell Mike Klis of 9News (on Twitter). The Broncos traded for Watson just four months ago, but there ultimately wasn’t a place for him on the 53-man roster.

In April, the Broncos shipped the No. 148 overall pick to the 49ers in exchange for Watson and the No. 212 choice. The deal, for at least a brief time, reunited the Watson and the Broncos, as the linebacker played in Denver during the 2016 season.

Watson will have to move on to a new employer, but this is nothing new for the former seventh-rounder. Throughout his nine-year career, Watson has played for a number of teams, mostly as a special teamer.

We have a player trade. The 49ers have dealt linebacker Dekoda Watson and No. 212 to the Broncos for No. 148, reports ESPN’s Field Yates (via Twitter).

This will be a reunion for Watson and the Broncos, as the linebacker played in Denver during the 2016 season. The former seventh-rounder has bounced around the NFL during his nine-year career. He spent the past two seasons with San Francisco, playing mostly on special teams.

Watson was limited to only four games in 2018, as he battled hamstring and calf injuries.