The 49ers will not pick up their option on wide receiver Pierre Garcon, according to Mike Garafolo of NFL.com (on Twitter). The move terminates his five-year, $47.5MM contract just two years into the deal. 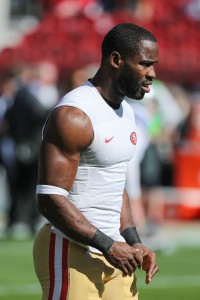 Despite Garcon’s past accomplishments, his release does not come as a total surprise. Last year, he played in just eight games and finished out with just 24 catches for 286 yards and one touchdown. In 2016, the season before he signed with the Niners, Garcon put up 79 catches for 1,041 yards and three touchdowns, which is the kind of production SF expected.

Unfortunately, injuries slowed Garcon during his time in SF, limiting him to just eight games in each of the last two years. But, in 2017, Garcon showed promise with a 40/500 line that had him on pace for a very solid season.

Garcon will enter a thin free agent WR market, which could enable him to land a solid deal. However, with his 33rd birthday coming up in August, he’ll have to brace for a lesser salary and a shorter deal than his last pact.

24 comments on “49ers To Part Ways With Pierre Garcon”