8:33am: About three weeks ago, we heard that the 49ers were making a push to re-sign fullback Kyle Juszczyk in advance of free agency. With the legal tampering period set to kick off tomorrow, it appears that San Francisco may have struck an accord just in time. 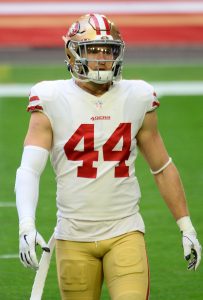 Late last night, Niners GM John Lynch posted the following tweet, which certainly makes it sound as if Juszczyk will be back: “I’m thirsty. Niners fans, you want some ‘Juice?'” Presumably, Lynch does not plan on bringing in O.J. Simpson in an advisory role, so that would seem to indicate that he was referring to a Juszczyk re-up.

In Lynch and head coach Kyle Shanahan‘s first offseason running the 49ers, they signed the former Ravens blocker to a four-year, $21MM deal. That 2017 pact still resides on its own tier at the fullback position, with only two other FBs — Derek Watt and C.J. Ham — earning more than $2MM in average annual salary.

Of course, Juszczyk is more than just a blocking fullback. While he is hardy the focal point of Shanahan’s offense, he is a useful and versatile weapon, having compiled 102 catches for 1,080 yards and 35 carries for 132 yards over the past four seasons. He has nine total touchdowns during that time, and he has earned four consecutive Pro Bowl nods for his efforts.

Because there are still no obvious comps, it could be that Juszczyk’s second contract with the 49ers will look much like his first one. But in any event, Lynch will have around $30MM in cap space heading into free agency, so he will have some ability to sign a quality FA or two and perhaps retain LT Trent Williams. 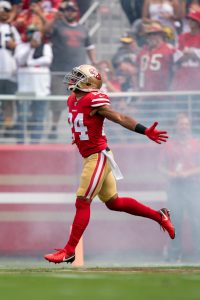 Deone Bucannon spent his 2017 offseason rehabbing from an injury, and the Cardinals became concerned the fifth-year linebacker suffered a serious setback at practice Thursday. But a day later, the team is relieved after an MRI revealed Bucannon did not damage any knee ligaments, Ian Rapoport of NFL.com reports (on Twitter). Bucannon did suffer a hyperextended knee and bruised a kneecap, per Rapoport, and the Cards aren’t going to rush him back as a result. Ankle injuries limited Bucannon to 12 games last season, and 2018 will be critical for him. He will play this season on a fifth-year option and is due for 2019 free agency. The Cards’ shift to a 4-3 look will result in their 2014 first-round pick lining up at outside linebacker. Initially a safety, Bucannon moved to an inside ‘backer slot and played there full-time over the past two seasons.

The 49ers saw a former first-round pick go down during camp as well. Here’s the latest from the NFC West:

One of the scarier stories of this season was the situation regarding Bears tight end Zach Miller‘s serious leg injury. Just a week ago, doctors were performing surgery to save his leg after he dislocated his knee while playing. However, after a successful procedure, the 33 year-old is set to be released from the hospital on Monday, reports Chris Mortensen of ESPN.com. According to Mortensen, the surgery was described as “heroic” by one doctor, who relayed that the surgeons needed to repair a torn popliteal artery. The road to recovery is still ongoing as the tight end will likely need multiple surgeries before starting his way to rehab, but the outlook is much better than it was because of the many great doctors and Miller himself as Mortensen outlines in his piece.