The Texans are bringing in a pair of running backs for workouts Thursday, according to Aaron Wilson of Pro Football Network. With starting rookie Dameon Pierce dealing with a hip injury this week, Houston invited Abram Smith and Ty’Son Williams in for workouts.

Smith is an undrafted rookie out of Baylor who converted from linebacker to running back in 2020. The Texans got a look at him some weeks ago when he played against them as a member of the Saints in the preseason. He led the Saints that day with 30 rushing yards on seven carries. Smith also worked out for the Seahawks yesterday, likely a result of Seattle placing running back Travis Homer on injured reserve.

Williams is a former Raven who came into the league after going undrafted in 2020. He spent much of his time on the practice squad but got the opportunity to start for Baltimore when injuries landed J.K. Dobbins, Gus Edwards, and Justice Hill all on injured reserve. He eventually was supplanted by free agent additions such as Le’Veon Bell and Latavius Murray.

The hope for Texans fans is that the workouts are solely precautionary measures that don’t speak to the injury status of Pierce, who had a strong outing last week.

Here are a few other workouts from around the league:

It didn’t take long for Sam Ficken to find a new home. Just a day after getting cut by the Jets, the kicker has been claimed by the Titans, the team announced Sunday.

Tennessee cut fellow kicker Blake Haubeil in a corresponding roster move, and also announced they’ve placed tight end Briley Moore on injured reserve. A Penn State product, Ficken went undrafted in 2015. He didn’t even sign his first NFL contract until 2016, and didn’t make a regular season roster until December of 2017 with the Rams. He kicked in a few games with Los Angeles between 2017-18, both times as a fill-in for an injured Greg Zuerlein.

After quick stints with the Seahawks and Packers, Ficken eventually landed with the Jets in September of 2019, where he found his first real home. He’s been New York’s kicker for most of the last two seasons, with mixed results. Injuries limited him to only nine games last year, in which he made 13 of 15 field goals and 12 of 15 extra points.

In 2019 he was shakier, making only 19 of 27 field goal attempts across 15 games. He’ll now battle it out with Tucker McCann to be the Titans’ next permanent kicker after they elected not to re-sign Stephen Gostkowski this offseason.

The Jets recently signed kicker Chris Naggar as part of a 12-man UDFA class, and head coach Robert Saleh said Naggar has a real chance to win the team’s kicking competition (Twitter link via Connor Hughes of The Athletic). Special teams coordinator Brant Boyer is said to be particularly excited about Naggar’s potential.

New York used three kickers last season: Sam Ficken, Sergio Castillo, and Chase McLaughlin. Ficken opened the 2020 season with the kicking job, but he missed six games due to injury. Castillo, Ficken’s first replacement, ended up converting just eight of 13 FG attempts, and the Jets turned to McLaughlin for the final game of the year. But, as a result of the Naggar addition, the club recently waived McLaughlin.

Ficken was retained for the 2021 campaign via a reserve/futures contract, but it sounds like he will need to beat out a rookie to keep his job. The Penn State product was not very good for Gang Green in 2019, connecting on 70.4% of his FG tries, but he was much better in his nine contests last year. He sank 13 of 15 tries (86.4%), though he did miss three PATs in 15 attempts. 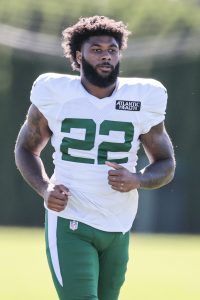