Broncos inside linebacker Jonas Griffith, who signed with the 49ers as an undrafted free agent in April 2020, was waived before the start of the regular season that year. He had a brief stint with the Colts’ taxi squad in October 2020 and rejoined the Niners as a member of their p-squad after being cut by Indianapolis, and though he did not play a regular season snap, he did enough in practice to earn a reserve/futures deal from San Francisco in January 2021. 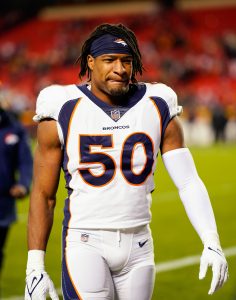 Broncos GM George Paton, who was in search of LB depth and who apparently saw something in Griffith’s preseason tape in 2021, swung a minor trade for the Indiana State product just before the 2021 campaign got underway. Griffith was used exclusively on special teams to start the season and suffered a hamstring injury that cost him four games, so he did not take a defensive snap until Week 14. Once he got on the field as a defender, though, he made an impact.

In his last five games (four starts), Griffith compiled 45 tackles, including four for loss, and as Ryan O’Halloran of the Denver Post notes, the 25-year-old ‘backer missed just one tackle and was also credited with 5.5. run “stuffs.” Though the sample size was small, the 69.1 overall grade that Pro Football Focus assigned to Griffith was encouraging as well.

Perhaps that explains the Broncos’ approach to the inside linebacker position this offseason. Denver re-signed starter Josey Jewell and added former Eagle Alex Singleton in March, but the size of Singleton’s contract (one-year, $1.115MM) suggests that he is not necessarily viewed as an every-down contributor. Meanwhile, 2021 third-rounder Baron Browning has been moved to outside linebacker, players like Alexander Johnson, Kenny Young, and Micah Kiser were not retained, and the team did not draft an ILB.

Per O’Halloran, Griffith has lined up alongside Jewell with the first-stringers during the OTAs that were open to the media, and he is currently ahead of Singleton on the unofficial depth chart. Even if Griffith holds onto that spot, however, there will still be opportunities for Singleton and other players like Justin Strnad and Barrington Wade, as most of Griffith’s snaps are expected to come in the Broncos’ base 3-4 package. That makes sense given his run-stopping abilities, though the fact that he has some fluidity and moves well suggests that he could be in line for an even larger role if he continues to impress.

Griffith admitted that it’s a “relief” that Denver has not yet done more to address its ILB corps, but he also knows his job is far from secure at this point. “You still have to do the job,” Griffith said. “That’s been my approach since being in the NFL. They can bring anybody in at any moment. … I don’t think anything is solidified. Every day is an opportunity to show this coaching staff what I can do.”

Griffith was retained for the 2022 season via the exclusive rights free agent tender and will earn $825K this year. As a former UDFA, he will be extension-eligible at season’s end, so he has plenty of motivation to fend off his competitors.

Tuesday has marked a two-trade morning for new Broncos GM George Paton. After sending wide receiver Trinity Benson to the Lions, the Broncos are acquiring linebacker Jonas Griffith from the 49ers.

Griffith will head to Denver in exchange for a 2022 sixth-rounder and a seventh in 2023, Mike Klis of 9News notes. San Francisco will also send a 2022 seventh-rounder to Denver in this deal. This trade construction is similar to the deal Paton completed with Detroit, which involved Benson and a pick going to the Lions in exchange for two draft choices.

A 250-pound linebacker out of Indiana State, Griffith arrived in the NFL as a UDFA last year. He spent time on the Colts and 49ers’ practice squads and landed a reserve/futures deal with San Francisco in January. He figures to contribute as a special-teamer in Denver.