The Browns are set to sign quarterbacks Jake Dolegala and Kyle Lauletta, according to Zac Jackson of The Athletic (on Twitter). They’ll provide badly-needed insurance this week as Baker Mayfield and backup Case Keenum remain on the COVID-19 list. 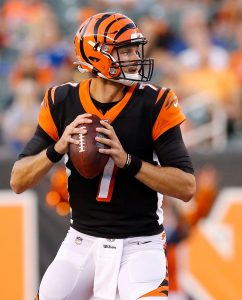 The Browns have upwards of 20 players on the COVID list, so there will be more moves to come. They’re currently expected to use Nick Mullens as their starter for tomorrow’s game against the Raiders with Dolegala and Lauletta in reserve.

Lauletta, who is being plucked from the Jaguars’ taxi squad, spent the summer with the Browns. To date, the 26-year-old has just two appearances on his resume, both with the Giants in 2018. Dolegala, 25, has never seen live action in the NFL.

The league’s updated COVID-19 protocols could allow Mayfield, Keenum, and other Browns players to suit up tomorrow. Of course, their availability will still hinge on their symptoms (or, lack thereof), vaccination status, and other factors.

The Patriots have added another quarterback. The team announced today that they’ve claimed quarterback Jake Dolegala off waivers from the Packers. The 24-year-old was waived by Green Bay yesterday.

More notably, it sounds like today’s transaction was insurance for another QB on the roster. According to Jeff Howe of The Athletic (via Twitter), backup Jarrett Stidham “isn’t expected back in the near future.” The quarterback landed on the physically unable to perform list earlier this week, and Howe writes that the player is battling a shoulder injury that could ultimately lead to surgery.

At one time, it was believed that Stidham could be the heir apparent to Tom Brady. Instead, the 2019 fourth-round pick barely played during his sophomore season, and he fell further down the depth chart when the team added Mac Jones this offseason. The Auburn product will be 25 by the start of the next season, and despite collecting only 48 attempts through two seasons, it’s unlikely his NFL career is in danger. However, it’s looking like he doesn’t have much of a future in New England.

Dolegala actually spent most of his rookie season on the Patriots practice squad, and after earning a reserve/future contract in January, he was waived by the team in April. His best chance of sticking with the Patriots is probably via the practice squad; even with Stidham temporarily out of the picture, the team is still rostering Jones, Cam Newton, and Brian Hoyer.

Aaron Rodgers reported to the Packers on Tuesday, but these backups didn’t have long to catch up with him. With the MVP back in action, both players faced long odds of making the final cut. Now, the Packers will move forward with Rodgers, Jordan Love, and Kurt Benkert as their top QBs, though Benkert may find himself battle with a fourth signal caller at some point.

The Packers signed Bortles to a one-year deal with zero guarantees back in May. The former No. 3 overall pick spent last season with the Broncos and Rams but saw zero action. And, in 2019, he threw two passes while serving as Jared Goff‘s backup in Los Angeles. Packers offensive coordinator Nathaniel Hackett worked as Bortles’ OC for nearly four years in Jacksonville, but the familiarity wasn’t enough for him to keep his job.

Dolegala, meanwhile, was added in June to fill reps during Rodgers’ absence. The 24-year-old will go up for grabs on the waiver wire and hope to see his first live action.

Five quarterbacks now reside on the Packers’ 90-man roster. After participating in Green Bay’s minicamp on a tryout basis this week, Jake Dolegala signed with the team, Ian Rapoport of NFL.com tweets.

Dolegala joined Jordan Love and recently signed QBs Blake Bortles and Kurt Benkert in Packers workouts this week. Dolegala may end up sticking around through training camp, though this scenario may be contingent on another player’s status.

Aaron Rodgers did not show for Packers minicamp, beginning his long-rumored holdout, and the reigning MVP has shown no signs of budging in his quest to leave Green Bay. Despite substantial fines on tap for training camp absences, Rodgers not turning up in late July is a very real possibility.

The Packers entered their offseason program with only Love as a willing quarterback participant, having not kept previous Rodgers backup Tim Boyle as a restricted free agent. Boyle is now in Detroit. The team’s QB depth chart now looks considerably different.

A four-year starter at Central Connecticut State, Dolegala went to training camp with the Bengals in 2019 and ’20 but has yet to throw a regular-season pass. The 6-foot-7 QB then bounced on and off the Patriots’ practice squad last season. New England parted ways with the 24-year-old passer shortly after the draft.

Defensive lineman Anthony Rush is expected to be waived to make room for Dolegala, Rob Demovsky of ESPN.com tweets. Rush played in one game with the Packers last season and has suited up for 14 over the past two years, spending 2019 with the Eagles and part of 2020 with the Seahawks.