In the wake of a key injury in their secondary, the Buccaneers are signing a notable name. Tampa Bay has added veteran corner Pierre Desir, Greg Auman of The Athletic tweets.

However, Desir will report to the practice squad initially instead of the active roster. The move comes after starting corner Sean Murphy-Bunting suffered an elbow injury in the Bucs’ opener that will have him sidelined for at least a few weeks. Not too long ago Desir was a highly regarded corner, although his stock has dropped sharply the past couple of years.

Last year he started eight games for the Jets, racking up eight passes defended and three interceptions, but was cut in November. He then spent the rest of the year with Baltimore but barely played. Originally a fourth-round pick of the Browns back in 2014, Desir rose to prominence with the Colts.

Desir, who turned 31 last week, will give Tampa some solid depth and a veteran presence in their young secondary.

The John Reid trade did not mark the only cornerback transaction for the Seahawks on Tuesday afternoon. They are releasing Pierre Desir, according to NFL.com’s Ian Rapoport (on Twitter).

Desir’s surprising release will clear a roster spot for Luke Willson, whom Rapoport adds will return to the Seahawks. Willson, 31, made a return visit to Seattle on Monday. The veteran tight end has twice headed elsewhere, but he will once again return to the Pacific Northwest and aim to contribute as a role player.

The Seahawks originally drafted Willson in the 2013 fifth round. He signed with the Lions in 2018 and spent time with the Raiders in the summer of 2019, earning some Hard Knocks screen time with the latter, but ended up back in Seattle for the ’19 season. After a short stint with the Ravens last year, Willson re-signed with the Seahawks in December. They will now add him to a group that is again dealing with a notable injury.

Colby Parkinson is rehabbing from a second foot fracture. Willson will team with Will Dissly and free agency addition Gerald Everett, though the veteran should not be expected to play a big part in Seattle’s passing game. Willson has not surpassed 200 receiving yards in a season since 2016.

Desir’s departure is somewhat strange for a team that is not exactly oozing high-end cornerback talent. Though, it does continue a trend for the soon-to-be 31-year-old defender. The Colts cut Desir in March 2020, and the Jets ended up cutting him during the season.

Desir, who caught on with the Ravens last year, has been with five teams — including two Seahawks stints, the previous one coming from 2016-17 — but has enjoyed quality stretches. He worked as a full-time starter in 2018 and ’19 with the Colts, who extended him in 2019. The former Division II standout will look for a new home ahead of what would be his eighth NFL season.

Veteran cornerback Pierre Desir will venture to a new team. The Seahawks are signing the well-traveled defender, according to his agency (on Twitter).

Desir, who has spent time with five franchises since entering the NFL in 2014, agreed to a one-year Seattle deal Wednesday. He will join Ahkello Witherspoon as corners who have agreed to terms with the Seahawks this offseason. The Seahawks are also moving Damarious Randall back to corner.

Following three seasons in Indianapolis, Desir played in Baltimore and with the Jets last season. The Seahawks, however, have been interested in Desir for a bit now. They pursued him last year, after the Colts released him, but Desir opted to sign with the Jets. A year later, Seattle will bring him in.

The Colts extended Desir following his successful 2018 season, when the Division II product worked as a 12-game starter for an improved Indianapolis defense. But Desir was not as reliable in 2019, which led to the Colts bailing on the deal in 2020. The 6-foot-1 cover man graded outside Pro Football Focus’ top 100 corners last season, allowing quarterbacks to complete 77% of their passes when targeting him — well up from the 54% clip he posted in 2018 — during his time with the Jets and Ravens.

Nevertheless, the Seahawks will take a flier on the seven-year veteran who has also spent time with the Browns and Chargers. Seattle lost Shaquill Griffin this offseason and should still be considered a candidate to add a corner early in the draft. But the team will try Desir, who is going into his age-31 season. 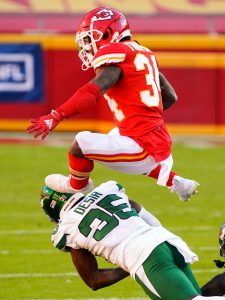 New York signed him to a one-year deal with a base value of around $4MM and max value of $5.5MM with incentives back in March, hoping he could be their top corner this year. Desir had been playing a near every down role, starting all but one game this season, so this is a pretty big shakeup for Gregg Williams’ defense. Obviously Desir is a vet who is set to be a free agent at the end of the year, so as his play has slipped there’s no reason for the tanking Jets not to get a look at some of their younger guys.

Desir will finish his Jets tenure with 47 tackles, eight passes defended, and three interceptions. The three picks are solid, but Desir often struggled in coverage and was pulled from games a couple of times. A fourth-round pick of the Browns back in 2014, Desir spent his first two years in Cleveland before getting cut. After brief stints with the Chargers and Seahawks, he found a home in Indianapolis.

He was with the Colts for three seasons, and was a full-time starter in 2018 and 2019. After a surprisingly strong 2018 campaign he was rewarded with a three-year, $22.5MM deal, but was cut after just one season of that. Since it’s this late in the year Desir will go on waivers, and it’ll be interesting to see if a contending team in need of secondary help decides to claim his expiring contract. Bryce Hall, a rookie sixth-round pick from Virginia who was recently activated off the NFI list, should be one of the aforementioned young guys who gets more run with the Jets moving forward.