“The Barbarian” is heading back to Arizona. According to ESPN’s Adam Schefter (via Twitter), the Cardinals have re-signed linebacker and special teams ace Dennis Gardeck.

It’s a three-year deal worth $12MM for Gardeck.

An undrafted free agent in 2018, Gardeck has spent his entire four-year career with the Cardinals. He was a key member of Arizona’s special teams unit through his first three seasons in the NFL, collecting 34 tackles in 44 games.

Gardeck saw a larger role on defense in 2021, getting into a career-high 19 percent of his team’s defensive snaps. Coupled with his usual special teams duties, the 27-year-old managed to finish with a career-high 23 tackles.

J.J. Watt is now firmly on track for the Cardinals’ season opener. The team activated its high-profile free agency addition from the active/PUP list Monday. Watt had missed all of Arizona’s training camp due to a hamstring injury. 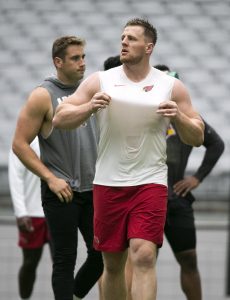 The Cardinals gave Watt a two-year, $28MM deal, beating out several other teams, and are hoping to pair the five-time All-Pro with Chandler Jones. Watt’s injury and Jones’ contract-related disenchantment have not made this an especially smooth camp for Cards pass rushers, but the duo is as of now en route to begin the season in Arizona’s lineup.

Watt missed most of the 2016 and ’17 seasons due to injury and saw a torn pectoral muscle sideline him for a lengthy stretch in 2019, but the future Hall of Fame pass rusher did play 16-game slates in 2018 and in 2020. This hamstring injury, which occurred during a conditioning test at the outset of camp, did not represent a great sign for Watt’s durability going into a 17-game season. But the Cardinals have exercised caution with the 32-year-old defensive end. His missing Week 1 due to this injury did not appear to be on the table.

Arizona also activated linebacker Dennis Gardeck from its PUP list. Gardeck suffered an ACL tear last season. The Cardinals still re-signed the former UDFA in April and hope to redeploy him for a fourth season. Gardeck has been one of the Cards’ top special-teamers, playing more than 70% of Arizona’s special teams snaps in each of his three seasons.

The Lions got Jared Goff back in the blockbuster Matthew Stafford trade, but with all their newfound draft capital they very well may take another passer early. They’ve got the seventh overall pick in April, plus two future first-rounders from the Rams now. Even if they do draft a young quarterback, it sounds like new offensive coordinator Anthony Lynn would prefer Goff to play initially. After acknowledging that if there were a dramatic difference in training camp he would have to play the better player to keep the locker room, Lynn explained his belief that a rookie quarterback should sit at first, via Carlos Monarrez of the Detroit Free Press.

“I’d love to see that rookie sit and watch for a little while. If he could watch for half the season or watch for the first year like Patrick Mahomes did (behind Alex Smith), I believe he can learn so much from the right veteran quarterback because a lot of rookies come into this league and they’re not ready,” the Lions’ new offensive play-caller said. “The speed of the game is twice as fast as it was in college and they don’t have success. And in today’s environment with social media things get out of whack and some of these guys lose their confidence and, hell, they never get it back. So if I can sit a rookie, I will. If I can.”

Of course, Lynn was the head coach of the Chargers this past year when they initially started Tyrod Taylor over first-round pick Justin Herbert. An injury knocked out Taylor after only one game, and Herbert took the job and never looked back.