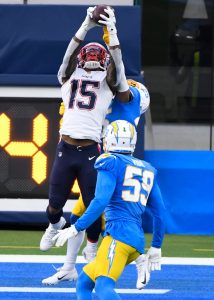 The Patriots are expected to sign former Lions linebacker Jahlani Tavai to the practice squad (Twitter link via Field Yates of ESPN.com). Tavai, a former starter in Detroit, should be a quick study on Matt Patricia‘s playbook.

The Lions couldn’t find a trade for the former Round 2 pick ahead of Tuesday’s roster cutdown deadline, so they waived him. This marked yet another second-round miss for the Lions, who also waived running back Kerryon Johnson earlier this year.

Tavai, the No. 43 overall pick in 2019, started 16 games during his time in Detroit, including ten in 2020. Pro Football Focus graded the University of Hawaii product as one of the worst off-ball ‘backers in the league last season. Still, the Patriots are getting him on the cheap and there’s still ample room for him to grow. 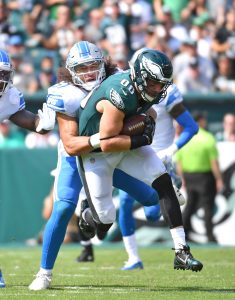 The Lions have a new regime in place, led by head coach Dan Campbell. Often times, coaching changes put incumbent players on the chopping block, but that’s not necessarily the case for 2019 second-round pick Jahlani Tavai.

“I tell you what, I’ve been really impressed with Jahlani,” linebackers coach Mark DeLeone said (via Justin Rogers of The Detroit News). “He’s been here (and) he’s been doing a great job. He’s in really good shape right now. I’m excited to work with him. I’m excited for us to get to OTAs and be able to continue with him because I’m really excited about him.”

“I can just tell you when he came out when he was out on the field this week, he’s been doing well and I’ve really enjoyed working with him so far. He has a really good understanding of the game. I think he’s gonna be a nice piece for us to work within this scheme.”

The Lions are exploring their options at LB, including newcomer Alex Anzalone, who has history with Campbell. Tavai, meanwhile, has failed to impress in his two pro seasons. After notching two tackles, one forced fumble, and one interception as a rookie, Tavai didn’t make much of an impact last year. He appeared in all 16 games and made ten starts, but earned poor marks from Pro Football Focus across the board, including a dismal 35.7 score for his coverage. Still, the Lions seem to think that this can be a turning point for the young ‘backer.

Linebacker Jahlani Tavai‘s rookie season is over. The Lions are placing the second-round pick on injured reserve with a shoulder injury, head coach Matt Patricia announced to the media Monday.

The injury is to the same shoulder that cause Tavai to miss time during his senior season in college, making it slightly more concerning, according to Tim Twentyman of the team’s official site (Twitter link). Patricia didn’t know yet whether the injury will cause Tavai to miss some of the offseason program. A Hawaii product, Tavai was drafted 43rd overall back in April.

He played a large role as a rookie, appearing in all 15 games and making six starts. Overall he played just a tick under 60 percent of the defensive snaps while also contributing on special teams. He’ll finish his first campaign with 57 tackles, two sacks, an interception and a forced fumble. He’ll be back in camp next year to compete for a starting job. 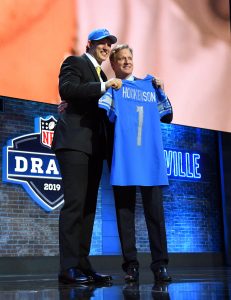