The Patriots have taken care of business early with one of their pending free agents. The team has reached agreement on a two-year, $4.4MM extension with linebacker Jahlani Tavai (Twitter link via ESPN’s Field Yates). The deal includes an $850K signing bonus, Yates’ colleague Mike Reiss tweets. 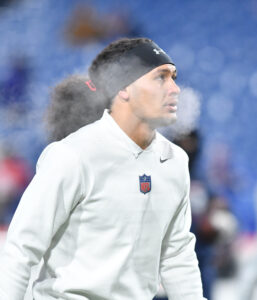 A second-round pick of the Lions in 2019, Tavai started 16 of 31 games in Detroit to begin his career. Over that two-year span, he totaled 168 tackles and 3.5 sacks, but failed to live up to his draft stock. The Lions attempted to trade him in the lead-in to the 2021 campaign, but were unable to find a willing suitor. They made him one of their final roster cuts, marking another disappointing end to a recent high draft pick for the team.

The Hawaii product immediately found himself on New England’s practice squad, giving him a change of scenery which has allowed him to take a step forward in his career. Tavai played primarily on special teams in 2021, something which has continued this year He has taken on a significant defensive role as well, however, with seven starts and a 52% snap share on defense. The 26-year-old has racked up 38 stops and 1.5 sacks in his hybrid role, earning a career-best PFF grade of 71.8 in the process.

That made him a logical extension candidate with his rookie contract set to expire at the end of the season. This deal will keep him on the books through 2024, allowing him to continue to play a notable part at the second level of the Patriots’ defense. That unit has seen plenty of turnover recently, of course, so some stability will be welcomed on both sides.

New England ranks in the top 10 in several major categories defensively this season, helping lead the team to a 6-5 record and putting them in playoff contention. Tavai will no doubt be a contributor down the stretch for not only the rest of this season, but the short-term future afterwards as he continues to prosper in his second NFL home.