Sunday night’s win over the Packers moved the Eagles to 10-1 on the season, but the team’s secondary will likely be without a key contributor for the time being. Safety C.J. Gardner-Johnson has a lacerated kidney, and is out indefinitely, reports Tom Pelissero of NFL Network (Twitter link). 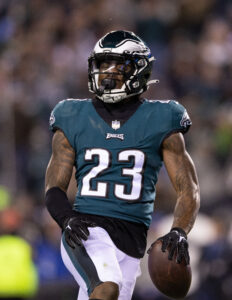 The 24-year-old will not require surgery, but more testing will be required to determine a firm recovery timeline. Pelissero notes that Gardner-Johnson is expected to return at some point this season, while ESPN’s Tim McManus tweets that the Eagles have yet to decide whether or not an IR stint is forthcoming. An absence of any length, though, will be noteworthy for the NFC leaders given his production this season.

The former fourth-rounder spent the first three years of his career in New Orleans, where he saw time both as a safety and slot corner. His five interceptions and 28 pass breakups over that span made him one of the team’s top young players, but a hold-in during training camp led to extension talks breaking down. That opened the door to a change of scenery for the final year of his rookie contract, especially given Philadelphia’s reported interest in adding on the backend of their defense.

The Eagles sent a 2023 fifth-round pick and a 2024 sixth-rounder to the Saints to land the Florida product, a move which has paid immediate dividends. Playing exclusively as a safety, Gardner-Johnson has notched a league-leading six interceptions in 2022, adding eight pass deflections and 60 total tackles. He will be difficult to replace given that level of production, though the Eagles can afford to be cautious with his recovery given their all-but assured place in the postseason. Undrafted rookie Reed Blankenship will likely step into a starting role, after he filled in for Gardner-Johnson following the injury on Sunday.

If the Eagles do choose to go the IR route, Gardner-Johnson would be unavailable for at least four weeks. The team is in relatively good shape with six of their eight activations remaining, though that number will drop in the near future. The team is expecting both tight end Dallas Goedert and defensive tackle Jordan Davis to be healthy by the end of the regular season. If the same holds true for their recently-acquired ball hawk, a deep playoff run could be in the cards.