NOVEMBER 29: Booth’s season is in fact over, as noted (on Twitter) by NFL Network’s Tom Pelissero. This will no doubt lead to an IR placement, as the Vikings look for added depth in the secondary and the 22-year-old turns his attention to next season.

NOVEMBER 28: The Vikings used their top two draft choices this year to address the secondary. Both players began developmental tracks as rookies, and injuries have now changed each defender’s path. 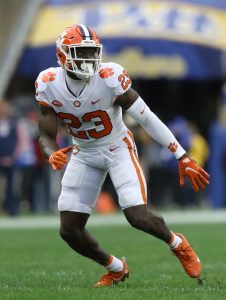 Weeks after Lewis Cine‘s season-ending injury, Ian Rapoport of NFL.com notes (via Twitter) second-round pick Andrew Booth is undergoing knee surgery. Kevin O’Connell said the young cornerback will likely be placed on IR. While Booth may be shelved for the season’s remainder, Chris Tomasson of the St. Paul Pioneer Press tweets the team is hopeful a January return can commence.

This has proven to be a rocky year for Booth, who underwent sports hernia surgery ahead of the draft and suffered a quadriceps injury in September, has not commandeered a regular role in Minnesota’s secondary. Booth did not play a defensive snap until Week 10 and struggled against the Cowboys — in his first start — a week later. This knee issue sidelined the Clemson product for the Vikes’ Thanksgiving Day game against the Patriots.

While Cine is traversing a long rehab route after undergoing two surgeries in London to repair a leg fracture, Booth does not appear in need of extensive rehab time. The Vikings have been one of the league’s healthiest teams this season, the highly drafted DBs’ issues notwithstanding. The NFC North leaders still have seven injury activations remaining. It appears the Vikes will be able to wait out Booth’s recovery and not factor IR math into the equation for the playoffs. Though, it is still a bit early for complete confidence on that front.

Additionally, O’Connell said the team is aiming to have Cameron Dantzler ready to return form IR when first eligible next week. Dantzler suffered an ankle injury that led him to IR. The former third-round pick has been the Vikes’ regular outside corner starter opposite Patrick Peterson when healthy this season. Without either Dantzler or Booth in the mix, Minnesota started Duke Shelley — a 2019 Bears sixth-rounder — alongside Peterson and slot corner Chandon Sullivan against New England.