The Vikings’ trip to London resulted in a win, but also a major injury to a key young member of their secondary. Rookie safety Lewis Cine was carted off the field with a fractured left leg, and will undergo surgery before returning to Minnesota, reports ESPN’s Kevin Seifert. 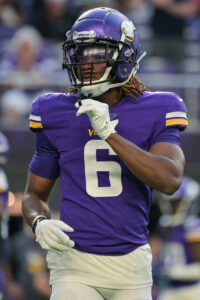 Cine suffered the injury during a punt return in the first quarter of today’s game against the Saints. An air cast was fitted, demonstrating the severity of the play. The news marks a major blow for the 22-year-old, who had played all-but exclusively on special teams to begin his NFL career.

The Georgia product was the final pick of the first round of April’s draft, after Minnesota traded back with the Lions. One of several highly acclaimed members of the Bulldogs’ title-winning defense, he took a step forward with each of his three seasons in college. Best known for his physicality, Cine carries high expectations for the long-term, but attention will now turn to his recovery.

“Very tough moment for our team,” head coach Kevin O’Connell said after the game. “[Cine is] obviously a guy that, from Day 1, has been a personal favorite of mine and does everything we’ve asked. He was continuing to progress in his rookie year and really had a dynamic role for us on special teams.”

With Cine sidelined, the Vikings will continue to use 2021 fourth-rounder Camryn Bynum as a starter at safety alongside Harrison Smith. The injury could open up more playing time for Josh Metellus, who has primarily played on special teams since being drafted in 2020.