The NFLPA has had stability at the top for over a decade, but it will have a new leader in the relatively near future. Executive director DeMaurice Smith is currently in his final term, and the union is beginning the search process for his successor. 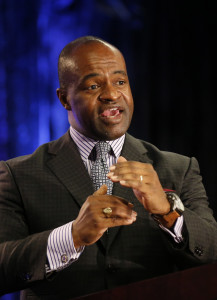 Smith, 58, was re-elected last October. The vote which extended his stay came in the wake of the latest CBA negotiations, which saw a notable split amongst the players. Smith received the minimum 22 votes required to retain his position, but his final term is expected to be brief.

The NFLPA’s executive director since 2009, Smith will be replaced by no later than 2025, per NFL Network’s Tom Pelissero. He adds, however, that Smith’s transition to a consulting role will more likely take place along a quicker timeline than that. The union’s search for his successor has just begun, with a vote being possible to take place as early as March 2023.

To date, only one candidate has emerged: former Pro Bowl quarterback Matt Schaub. The 41-year-old’s playing career ended after the 2020 season, the final year of his second stint with the Falcons. Schaub – who also spent seven seasons as the Texans’ starter – has been a vocal critic of the two most recent CBAs, and their impact on players.

“It is unprecedented what we’ve done the last two CBAs, with the tenure of the deals, which is almost triple the average career length of most players,” he said recently, via Daniel Kaplan of The Athletic (subscription required). “These past two, it’s been too long based on what has shifted hands and shifted across the table.”

The most recent CBA was marked by a widespread increase in player compensation, particularly at the low end of the pay grade, in exchange for the regular season being expended to 17 games. New TV deals in particular have, on the other hand, led to major spikes in franchise values, as demonstrated most recently by the record-shattering sale of the Broncos this summer.

To find a successor, NFLPA president J.C. Tretter, along with the 10 other members of the union’s executive committee and three most senior player representatives will compile a list of two to four candidates. A general vote amongst all player reps will determine Smith’s replacement. With the current CBA set to run through March 2031, though, there does not need to be much urgency in the search process.