After selecting at No. 2, the Lions have now moved up to No. 12, and they’ve gone with an offensive weapon. With their new selection, Detroit has selected Alabama wideout Jameson Williams. 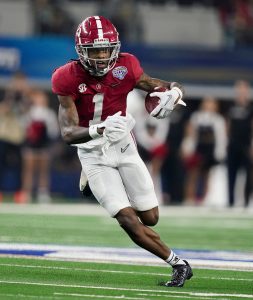 Williams suffered a torn ACL in the 2022 College Football Playoff National Championship game. Assuming he is placed on the physically unable to perform list, the rookie wideout wouldn’t be able to make his NFL debut until at least Week 7, which would be late October.

When healthy, Williams is one of the best receivers in the draft. He had a breakout campaign in 2021 after transferring from Ohio State to Alabama, finishing with 79 catches for 1,572 yards and 15 touchdowns, earning him a first-team All-American nod. A number of teams have been connected to the receiver, including the Jets and Eagles.

In Detroit, he’ll provide an uncertain offense with a jolt of energy. Previous reports indicated that the organization made the trade for Pittsburgh QB Kenny Pickett, and it will be interesting to see if the organization adds a rookie to compete with Jared Goff under center.