The Colts formed an interesting post-Anthony Castonzo plan at left tackle this offseason, signing Eric Fisher to take over after his Achilles rehab concludes. But the longtime Chiefs edge protector is not certain to be ready by Week 1. Indianapolis’ stopgap options have not impressed thus far. 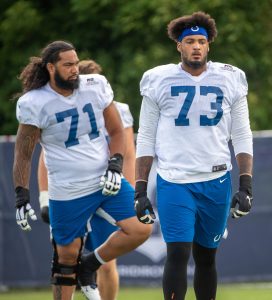 Julie’n Davenport, Sam Tevi and Will Holden represent the trio vying to be the fill-in while Fisher recovers and the Colts’ swing tackle once Fisher is back, and Jim Ayello of the Indianapolis Star notes all three have struggled during training camp. Colts O-line coach Chris Strausser said it is somewhat disappointing no clear-cut favorite has emerged to be the team’s stopgap solution here.

Indy signed Davenport and Tevi this offseason, while Holden arrived last December after being plucked off Baltimore’s practice squad. Davenport has taken the bulk of the first-team reps lately, per Ayello, but the Colts are planning to also give him work at right tackle to prepare for a potential swing role. Davenport, who has started for the Texans and Dolphins, began Colts camp on the team’s reserve/COVID-19 list.

Neither Tevi nor Davenport has impressed as a starter during their respective careers. The Colts gave each one-year deals, with Tevi’s guarantee ($1MM) topping Davenport’s ($388K). But one could well end up being entrusted to protect Carson Wentz — or one of his backups — come Week 1. This underwhelming left tackle competition has taken place while Quenton Nelson recovers from a foot injury. The All-Pro guard is also not a lock to be ready by Week 1.

When the Colts signed Fisher, marking a reunion between he and ex-Chiefs exec Chris Ballard, the prospect of the ninth-year veteran not being ready until October loomed. Frank Reich said recently the 30-year-old tackle looked “really good” in his solo ramp-up workouts, but the timetable here remains murky. Fisher suffered the Achilles tear in the AFC championship game.

As far as outside options go, Russell Okung remains a free agent. The veteran starter, who is 32, has been waiting for a viable offer. The Bears, who may be without rookie Teven Jenkins for the season, just signed Jason Peters to take away one option here. Beyond Okung, the free agent market is fairly lean at this position. How the Colts’ group looks in the team’s second preseason game may determine whether another outside option will be considered, though Fisher’s timetable represents the key component here.

The Ravens will give Dez Bryant another opportunity. After not activating the veteran wide receiver last week, Baltimore will promote him ahead of Sunday’s game against Tennessee, per ESPN.com’s Field Yates (on Twitter).

Bryant did not see much action (two offensive snaps) in his Ravens debut — Week 9 against the Colts — but any playing time marked a major step for the former Pro Bowler. Bryant missed all of the 2018 and ’19 seasons.

Having Bryant active gives the Ravens another option in the passing game. Baltimore has not come especially close to matching its 2019 offensive dominance, having lost multiple All-Pro O-linemen from that record-setting unit. This season, Lamar Jackson ranks 18th in QBR and has struggled to connect with his top targets. Baltimore’s passing attack ranks 31st in the NFL.

While the now-32-year-old Bryant should not be expected to show his Cowboys form, he does have three 1,000-yard seasons and two more 800-plus-yard campaigns on his resume. He will join Willie Snead as veteran targets available for Jackson on Sunday.

The Ravens are also promoting tight end Luke Willson and tackle Will Holden from their practice squad. Willson’s promotion comes shortly after the Ravens lost blocking tight end Nick Boyle for the season.