A two-time Olympic finalist in the 110-meter hurdles, Devon Allen will give football another try. The Eagles signed the U.S. track and field standout Friday, providing Allen an opportunity to resume a career that has been on hold for a while. 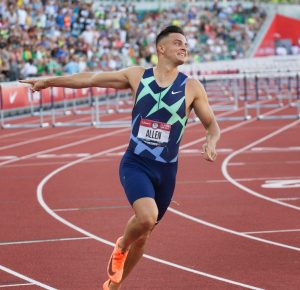 Allen last played football in 2016, when he suited up at Oregon, but was far better on the track and elected to turn pro in that sport. The former Marcus Mariota target has been a mainstay in the 110 hurdles for the past six years, but he totaled 684 receiving yards and scored seven touchdowns as a freshman with the Ducks — on a 2014 team that played for a national championship. Allen, 27, ventured back to his alma mater last week to participate in the Ducks’ pro day and clocked a 4.35-second 40-yard dash.

“It’s now or never because I don’t want to get too old,” Allen said last week. “I don’t want to turn 30, 31, and then try and get into the NFL. I know the skill gap is still there from college to the NFL, but I think when I did play college and when I did play at a pretty good level, I would consider myself talented enough to play in the NFL.”

Although Allen has three U.S. national hurdle titles on his resume, he narrowly missed the Olympic podium in 2016 (fifth) and 2021 (fourth) and has seen Grant Holloway usurp him as Team USA’s top high hurdler. Allen entered the professional track ranks after an ACL tear ended his Oregon football run in 2016.

This signing is closer to a flier than a legitimate attempt for the Eagles to upgrade at receiver, but the team has been patient this offseason. Philadelphia has added Zach Pascal but pursued bigger names — from Allen Robinson to Christian Kirk to DeVante Parker — in free agency. The team has two first-round picks in the upcoming draft but has used first-rounders on wideouts in each of the past two years.

This month will go a long way toward determining whether or not Las Vegas becomes the Raiders‘ new home. The Southern Nevada Tourism and Infrastructure Committee will meet again on Monday for further discussion on a proposed $1.45 billion stadium.

A July 28 deadline looms for the city to finalize funding plans for a future Raiders stadium, and Vincent Bonsignore of the Los Angeles Daily News tweets the city will meet that deadline and come up with a stadium financing arrangement, noting “a lot of” behind-the-scenes action is occurring to move this process forward.

We last heard the SNTIC and the developers’ hopes at how much public money will be used in financing this stadium remain incongruent. But with Oakland far behind Vegas in this process and Mark Davis previously pledging he’d move the Raiders to Nevada — albeit without certainty he’d receive the 24 votes necessary from his fellow owners — an potentially unprecedented opportunity exists for the city to acquire an NFL franchise.