The Jaguars will re-sign defensive lineman Dawuane Smoot, as Ian Rapoport of NFL.com tweets. It’ll be a two-year deal worth $10MM, including $5.25MM guaranteed (per Aaron Wilson of the Houston Chronicle on Twitter).

The Jaguars inked Roy Robertson-Harris earlier in the day but still found room to keep one of their own. Though he’s not a marquee name, new head coach Urban Meyer apparently liked Smoot’s ability to move around the line. Robertson-Harris is similarly versatile, but flexibility will help as the Jaguars will shift more towards a 3-4 set.

The Jaguars have signed their third-round pick, defensive end Dawuane Smoot, per a team announcement. The signing of Smoot means the Jaguars have locked up their entire seven-player draft class. 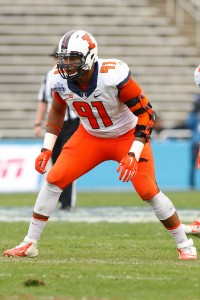 Smoot, the 68th overall selection, is coming off a four-year career at Illinois that saw him rack up 38.5 tackles for loss and 15.5 sacks. Now, the 6-foot-3, 264-pounder will act as depth as part of an impressive defensive end group that includes offseason signing Calais Campbell, Dante Fowler and Yannick Ngakoue, who combined for 20 sacks last year.

Here’s a look at the rest of Jacksonville’s 2017 draft class: