D.J. Reader is back. The Bengals have activated the defensive tackle from injured reserve, according to Paul Dehner Jr. of The Athletic (on Twitter). Cincinnati also promoted wideout Trenton Irwin and punter Drue Chrisman from the practice squad. 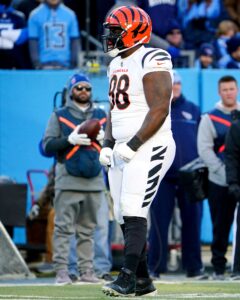 Reader inked a four-year, $53MM deal to join the Bengals in 2020. He was limited to only five games during his first season in Cincy thanks to a quad injury, but he returned to start all 15 of his appearances in 2021. The defensive tackle finished the campaign with 43 tackles and a pair of sacks, and he added another 12 tackles and a sack in four playoff starts. Thanks to his regular season performance, Pro Football Focus ranked him ninth among 108 qualifying interior defenders.

The 28-year-old started each of the Bengals’ first three games this year, compiling 10 tackles. He suffered an MCL injury in September that shelved him for a few months, but he returned to practice earlier this week and is now in line to take the field tomorrow in Pittsburgh.

Chrismas is getting a chance to be Cincinnati’s punter despite Kevin Huber‘s presence on the roster. According to Dehner (on Twitter), Chrismas will have a chance to earn the full-time gig, and Huber has “been in the loop”on the team’s plan. Huber’s 2022 salary is guaranteed regardless of how things unfold. Huber has struggled this season, with his 43.2 yards per punt misrepresenting his lowest average since 2010. Chrismas, a 2021 UDFA out of Ohio State, has spent the majority of his career on the Bengals practice squad.

Irwin has earned promotions in each of the Bengals’ last two games following Ja’Marr Chase‘s injury. The 26-year-old wideout has gotten into 11 games in four seasons with the Bengals, collecting six receptions (including three this season).

The Bengals will not have their highest-paid cornerback available against the Chiefs on Sunday. Trae Waynes is now on Cincinnati’s reserve/COVID-19 list.

This will mark yet another absence for Waynes, who has struggled to stay on the field since signing a big-ticket contract with the Bengals last year. Waynes missed all of last season because of a torn pectoral muscle and was down nearly three months this year due to a hamstring injury.

The former first-round pick has played in just four games since signing a three-year, $42MM deal with the Bengals in March 2020. Waynes returned from injury in Week 15 and started against the Broncos. However, Eli Apple started over him against the Ravens, with Chidobe Awuzie back after missing the Denver trip due to a positive coronavirus test. Waynes is due to count $16MM against the Bengals’ cap in 2022.

Wide receiver Trenton Irwin also landed on Cincinnati’s COVID list. Other than this Friday news, the Bengals are fairly healthy going into their matchup against the Chiefs. Backup quarterback Brandon Allen resides on the team’s virus list but has a chance to clear protocols by Sunday.