The Broncos thinned their running backs room by choice earlier today, but they will be even more shorthanded at the position unintentionally for the short-term future. Chase Edmonds is dealing with a high ankle sprain, and will miss at least “a few weeks,” per ESPN’s Adam Schefter (Twitter link). 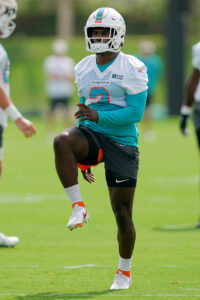 The 26-year-old had a career-year in 2021, operating in a timeshare with James Conner in Arizona. He racked up 592 yards on the ground (at a average of 5.1 yards per carry), adding 311 yards through the air. That earned him a two-year, $12.6MM deal with the Dolphins in free agency. Miami made a number of moves aimed at improving their ground game relative to the previous season.

Edmonds played a small role in that feat, however; the former fourth-rounder received just 42 carries with the Dolphins, producing 120 yards and a pair of touchdowns. He found himself on the move at the start of the month when he was included in the package Miami sent to Denver for edge rusher Bradley Chubb. That left him in another crowded backfield for the back half of the season.

The Broncos have made several moves in the wake of Javonte Williams‘ ACL tear. With the promising young back sidelined for the remainder of the season, veteran backup Melvin Gordon was expected to take over the lead role. His fumbling issues have continued, however, leading to today’s decision to move on from him. That could have resulted in a larger workload for Edmonds, but he is now facing a relatively lengthy absence.

In light of today’s news, the Broncos will likely turn to Latavius Murray as their No. 1 tailback this week against the Panthers. He signed to Denver’s active roster from New Orleans’ taxi squad, and has carved out a significant role since making his Broncos debut in Week 6. Fellow veteran Marlon Mack – who arrived in October after a brief stay on the 49ers’ practice squad – will likely serve as the backup, with Devine Ozigbo representing a potential elevation before gameday.