DeAndre Carter played four games with the Bears in 2020. Despite the team not re-signing the wide receiver/return specialist in free agency last year, a new Chicago regime is interested. 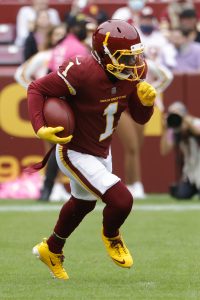 The Bears brought Carter in for a visit Monday, Doug Kyed of Pro Football Focus tweets. Carter spent the past season with Washington, working as a return man and a part-time starter. The Bears are not the only team interested in the former UDFA. The Chargers are bringing him in as well, with ProFootballNetwork.com’s Aaron Wilson indicating (via Twitter) that meeting is set for Tuesday.

A Sacramento State alum, Carter is best known as a pro for being a returner. The 5-foot-8 talent spent last season as Washington’s primary kick and punt returner; Carter returned a kickoff for a 101-yard touchdown against Atlanta in Week 4. He returned both kicks and punts for the Texans and Eagles previously. The Bears’ previous regime used Carter sparsely; he returned four punts for Chicago in 2020. Last season, Carter caught a career-high 24 passes for 296 yards and three touchdowns. The Bears initially picked up Carter as a midseason waiver claim.

Washington is making an interesting special teams addition. The team has signed receiver/returner DeAndre Carter, they announced on Thursday.

Carter entered the league as an UDFA in 2015 originally with the Ravens, but he didn’t see a regular season NFL field until 2018. After grinding for a few years on the practice squads of teams like the Raiders, Patriots, and 49ers, he finally broke through with the Eagles. He played in seven games for Philly before being waived and claimed by Houston, where he made more of an impact.

He served the same role for the first nine games of 2020 before getting cut and claimed by the Bears. He played the final month of the season in Chicago returning punts. He’s never returned a kick to the house, but has done some damage. Washington doesn’t have any clear better options currently on the roster, so he’ll presumably slot in as the primary returner for 2021.

4:11pm: Return man DeAndre Carter tested positive for the coronavirus, according to Brad Biggs of the Chicago Tribune (on Twitter). He is now on their reserve/COVID-19 list. It appears this was responsible for the team shutting down its facility. The Bears claimed Carter off waivers from the Texans last month. He has played in two games with the team, including Sunday’s loss to the Lions.

9:55am: The Bears have closed their team facility for the day, per a club announcement. They’ll be WFH all day Thursday as they gear up for Sunday’s game against the Texans.

“This morning we were notified that we had a positive COVID-19 test,” the team said in a statement. “As a result, the club has elected to pause all in-person football activities today and close Halas Hall. Instead, all meetings will be conducted virtually. The individual who tested positive has been contacted and has already begun self-isolation. We are working with the NFL medical experts to identify close contacts and follow the league’s guidance. The health and safety of our team, players and staff are the highest priority.”

The Bears did not identify the positive player or staffer, though practice squad wide receiver Thomas Ives was recently placed on the reserve list. He was reported to have tested positive for the virus, and two other p-squadders — defensive lineman LaCale London and linebacker Manti Te’o — have also hit the list.

Every NFL team has had to suspend practice at one point or another in 2020. For the Bears, it’s the second time that they’ve had to scrap a Thursday session. For now, their game against the Texans is slated to go on as scheduled.