The Bears’ first-place rushing attack will need to get by without one of its pillars in the coming weeks. Khalil Herbert is heading to IR, according to ESPN.com’s Field Yates (on Twitter).

A hip injury will sideline Herbert, who has played a major role in Chicago’s backfield in his second pro season. He must miss at least four games. The Bears also added cornerback Justin Layne via waiver claim. The Giants waived Layne on Monday. Matt Eberflus does not view Herbert’s injury has season-ending, per the Chicago Sun-Times’ Patrick Finley (on Twitter). The earliest Herbert can return is Week 15. 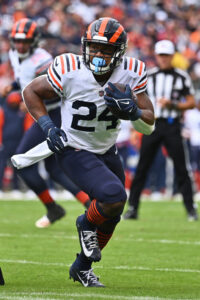 Chosen in last year’s sixth round, Herbert has already smashed his rookie-year rushing total. Despite not taking as many handoffs as starter David Montgomery, the elusive backup has 643 rushing yards — at an eye-catching six yards per carry. Montgomery, who has totaled 115 carries to Herbert’s 108, has amassed just 434 yards. The Bears will need to lean on their starter more, though having a quarterback amid one of the all-time great QB rushing seasons will help. Justin Fields leads the Bears with 749 rushing yards.

Among non-quarterbacks, Herbert’s 6.0 yards per carry ties Tony Pollard atop the NFL. Being on pace for more than 1,000 yards despite not starting, the Kansas and Virginia Tech product has displayed the potential to be a long-term Fields complementary piece.

Though buoyed largely by Fields’ recent run-game dominance, the Bears’ near-400-yard lead on the rest of the NFL in rushing (201.7 yards per game) has also featured extensive Herbert contributions. The second-year back’s emergence likely will factor into how the Bears proceed with Montgomery, who is one of many starter-caliber backs set to hit free agency in March. No known Montgomery extension talks have taken place.

Layne has continued to generate interest, despite not seeing much time at cornerback. The Steelers drafted Layne in Round 3 in 2019; he has played 156 career defensive snaps. The Giants claimed him following cutdown day in August but used him on just 11 defensive snaps during his half-season New York stay. But the Michigan State alum has been a special teams regular throughout his career. Layne would stand to impact the Bears on this front. His rookie contract expires at season’s end.

The Steelers tied up one of their loose ends before the start of free agency this week, signing cornerback Arthur Maulet to a new two-year deal, according to NFL Network’s Ian Rapoport.

Maulet signed with the Saints as an undrafted free agent in 2017, spending most of his time in New Orleans on the practice squad but appearing in six games. After being waived in 2018, the Colts claimed Maulet off waivers. He played five games in Indianapolis, earning his first career start, before getting waived and re-signed to the Saints’ practice squad.

In May 2021, the Steelers signed Maulet to a one-year, $990,000 deal. Maulet appeared in all but one game last year for the Steelers, earning two starts at cornerback. Maulet adds some much needed depth to the cornerback’s room in Pittsburgh, rejoining starter Cameron Sutton and back ups Tre Norwood, James Pierre, and Justin Layne. Starting cornerback Joe Haden and key back up Ahkello Witherspoon are also on their way to free agency.

May 11: In an effort to resolve his legal situation as expeditiously as possible, Layne recently pled guilty to three misdemeanor charges — possession of criminal tools, speeding, and driving without an operator’s license — as Josh Alper of Pro Football Talk details. He received a six-month suspended sentence, but he will not serve any of that sentence if he pays a $500 fine, forfeits a handgun, and performs 32 hours of community service.

Theoretically, Layne could still be suspended by the league, but getting rid of the felony charge that he was facing can’t hurt. With the offseason departures of Steven Nelson and Mike Hilton, Layne stands to get an uptick in playing time in 2021.

Apr. 24: Steelers cornerback Justin Layne has found himself in hot water. The 23-year-old was arrested early Friday morning “on suspicion of felony transportation of a firearm inside of a vehicle,” per ESPN’s Ben Baby. 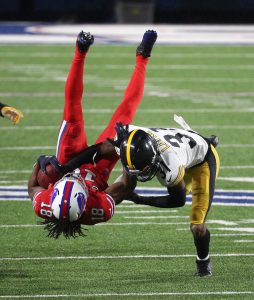 Layne was also charged with a pair of misdemeanors: “driving with a suspended license and exceeding speed limits.” According to police, the player was pulled over after he was observed going 89 miles per hour in a 60 mph zone. Police searched the car after smelling marijuana, and they proceeded to find a loaded pistol (via NFL.com). The player didn’t have the proper license for a conceal-carry permit. Layne later acknowledged the gun was his.

Police also learned that Layne “had an outstanding warrant for failure to appear on a traffic violation in another jurisdiction.” Following his arrest, he was granted release on a personal bond, with his next court appearance coming in early May.

“We are aware of the incident but still gathering information,” the Steelers said in a statement. “We will have no further comment at this time.”

Following a standout career at Michigan State, Layne was selected by the Steelers in the third round of the 2019 draft. After barely playing during his rookie season (despite officially appearing in 10 games), he saw more time on the field in 2020. He finished this year having appeared in all 16 games, collecting 22 tackles.

The Steelers finished up their 2019 draft class’ contracts on Thursday, coming to terms with third-round pick Justin Layne on the customary four-year rookie deal.

But Layne is now in the fold and is expected to compete for an immediate role in Pittsburgh’s secondary. After beginning his Michigan State career as a wide receiver, the former Cleveland-area high school standout became a high-end cornerback prospect. The 6-foot-2 defender started 26 games for the Spartans and joins a Steelers secondary that features Joe Haden, Mike Hilton, Steven Nelson and underwhelming former first-rounder Artie Burns.