4:08pm: Testing revealed Jackson suffered an Achilles tear, Ian Rapoport of NFL.com tweets. This will shut down the veteran cornerback until well into Carolina’s 2023 offseason program, if not training camp.

10:53am: The Panthers came out of last night’s game against the Falcons with a victory, but they lost a significant member of their secondary in the process. Cornerback Donte Jackson exited the game with an Achilles injury, per Joe Person of the Athletic (Twitter link). 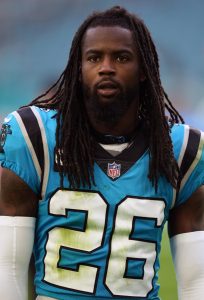 That points to a serious, if not season-ending, injury for the 27-year-old. Jackson had been enjoying another productive campaign in 2022, his fifth with the Panthers. The former second-rounder started all nine games this season, recording a pair of interceptions (including a pick-six) and 35 tackles.

A groin injury ended Jackson’s 2021 campaign in November. That limited him to 12 games last season, continuing a trend of short-term absences. The LSU alum has played every game in a season just once, his rookie year in 2018. The groin issue came as he was approaching free agency, and led some to wonder if he would head elsewhere this past offseason.

Instead, he signed a three-year deal to stay in Charlotte. That allowed him to continue his time with his only NFL team, and build off of the 12 interceptions and 38 pass breakups he had amassed to that point. That consistent production made him a trade target in the build-up to last week’s deadline, but the Panthers’ asking price was too high for a deal to be finalized.

While Jackson will be missed on the backend of Carolina’s defense, the team has made significant investments in the position in recent years. That includes 2021 first-rounder Jaycee Horn, who has been a full-time starter this year, and the trade acquisition of C.J. Henderson last season. A fellow first-rounder himself, the former Jaguar has seen an uptick in usage in 2022 compared to his time with the team last season. His 56% snap share figures to increase in the wake of Jackson’s absence.

Last night’s win moved the Panthers to 3-7 on the year, keeping them within striking distance of the NFC South lead. A string of sustained defensive performances will be harder now, however, with Jackson being sidelined.