Not long after visiting Chicago, veteran tight end James O’Shaughnessy will make the city his next NFL home. The Bears announced on Monday that they have signed him to a one-year contract.

O’Shaughnessy was a fifth-round pick of the Chiefs in 2015, when new Bears general manager Ryan Poles was the team’s scouting director. His two seasons there only saw him make eight catches, however, as he played a limited offensive role. Kansas City traded him to New England in 2017, but by the time that campaign started, he had been claimed off waivers by Jacksonville.

With the Jaguars, O’Shaughnessy saw much more playing time. He never topped 262 yards in a season, but averaged just under 10 yards per catch in his five seasons there. Overall, he has compiled 112 catches for 1,108 yards and three touchdowns across 80 games played.

Availability has been a problem for the 30-year-old in recent years. The 2019 and 2021 campaigns were both cut short by significant injuries. That, along with the addition of Evan Engram in free agency by the Jaguars, left O’Shaughnessy in search of a new team.

By signing with Chicago, he will join a TE room headed by Cole Kmet. The Bears also have Ryan Griffin and Jesper Horsted on the depth chart at the position. O’Shaughnessy will represent a familiar face to the new front office, as well as a veteran presence on a rebuilding offense.

James O’Shaughnessy may be close to finding his next home in the NFL. The veteran tight end has visited the Bears, per Pro Football Network’s Aaron Wilson (Twitter link). 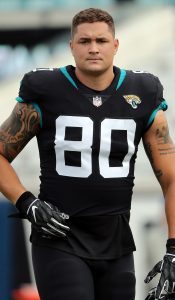 O’Shaughnessy, 30, began his career with the Chiefs in 2015. He hardly saw the field in Kansas City, though, and he was traded to New England in 2017. Before that campaign started, the Jaguars claimed him off waivers, beginning a five-year stint in Jacksonville.

O’Shaughnessy took over the starting role with the Jaguars in 2018. The 2020 campaign was his most productive, when he posted 28 catches for 262 yards. The seasons before and after that one, however, saw the former fifth-round pick miss significant time due to injuries. Overall, he played 57 games in Duval County, totalling 104 receptions, 1,022 yards and three touchdowns.

The Jaguars made a notable addition to the tight end room this offseason, signing former Giant Evan Engram. While there is a possibility he could see time as a slot receiver, his addition adds a different element to the position than what the team previously had. The Jaguars also have Chris Manhertz and Dan Arnold under contract for the 2022 season.

In Chicago, O’Shaughnessy would join a rebuilding Bears offense. The team already has Cole Kmet at the top of the depth chart, along with veteran Ryan Griffin. Still, O’Shaughnessy could provide experienced depth at the position as he looks to extend his career.

The Jaguars have placed James O’Shaughnessy on the injured reserve list. The move will free up a roster spot in Jacksonville while the tight end recovers for the next three-to-four weeks.

O’Shaughnessy was forced out early against the Broncos with an ankle sprain. Up until that point, the Jags were expecting a big day from the tight end — he had just caught six passes for 48 yards in Week 1, good for No. 2 on the team. Now, the Jaguars are down 0-2 and without one of their best offensive weapons.

The Jaguars will rely on Chris Manhertz, Jacob Hollister, and fifth-round pick Luke Farrell to fill out the tight end group, perhaps with another addition between now and this weekend. One spot has already been taken by cornerback Nevin Lawson, who agreed to a one-year deal earlier today.

The winless Jags — sans O’Shaughnessy — will battle the 2-0 Cardinals this Sunday.

Jaguars tight end James O’Shaughnessy will miss 3-to-4 weeks with an ankle sprain (Twitter link via Doug Kyed of Pro Football Focus). That timeline could make him a candidate for the short-term injured reserve list, but the Jags will wait for more on his condition before making any decisions.

It’s unfortunate timing for O’Shaughnessy, who has been a bright spot through two trying weeks for the Jaguars. In Week 1, the veteran caught six passes for 48 yards, good for second on the team in catches. Then, on Sunday, he had an early 24-yard grab against the Broncos before being forced out. The Broncos went on to beat the Jaguars 23-13, putting Urban Meyer & Co. at 0-2.

For now, the Jaguars will be left with Chris Manhertz, Jacob Hollister, and fifth-round pick Luke Farrell as their tight ends. They may move to promote Matt Sokol — a former Chargers reserve — from their 16-man practice squad this week.

The winless Jags will face the 2-0 Cardinals in Jacksonville on Sunday.

Jaguars tight end James O’Shaughnessy suffered a torn ACL, according to Ian Rapoport of NFL.com (on Twitter). A Monday morning MRI confirmed that he’ll need surgery once his swelling reduces.

O’Shaughnessy is done for the season as a result of the injury and the Jaguars will place him on injured reserve to open up a roster spot. For now, the Jags will move forward with Geoff Swaim and Seth DeValve at tight end, plus third-round pick Josh Oliver, once he’s back from a hamstring ailment.

Before exiting Sunday’s game against the Panthers, O’Shaughnessy had three catches for a season-high 57 yards. His season ends after five games with 14 grabs for 153 yards and two touchdowns, including scores in wins against the Titans and Broncos.

Next up for the Jaguars: a Week 6 date with the Saints, in New Orleans.

The Jaguars have re-signed tight end James O’Shaughnessy, according to a team announcement. O’Shaughnessy, 27, set new career highs with 24 catches for 214 yards last season and he could be in for a larger role this season.

The Jaguars currently have four tight ends on the roster in O’Shaughnessy, Geoff Swaim, Ben Koyack, and Pharoah McKever. More TE help could be on the way, but for now, O’Shaughnessy seems primed for a decent chunk of playing time.

Before re-signing with the Jags, O’Shaughnessy paid a visit to the Steelers, where he would have backed up starter Vance McDonald. The Steelers will have to find their own backup TE elsewhere, either in these later stages of free agency or in next month’s draft.

Here’s a quick look at the AFC North: