Nsimba Webster could make his NFL debut tomorrow. NFL.com’s Ian Rapoport reports (via Twitter) that the Rams have elevated the wideout to their active roster. 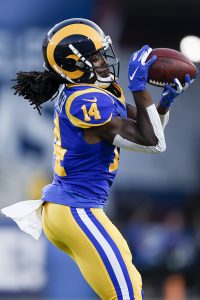 Part of the reason for Webster’s promotion is due to the Rams’ diminished receiver depth. Brandin Cooks remains sidelined with a concussion, while three of the team’s tight ends (Gerald Everett, Tyler Higbee, Johnny Mundt) were also listed on the injury report with various ailments. Jared Goff will need every healthy target against the Bears, necessitating today’s move.

However, Rapoport notes that Webster was also promoted because a rival team tried to sign him off the practice squad. The Rams clearly believe in the receiver’s potential, leading to his placement on the roster.

There’s plenty of reasons to be intrigued by the undrafted rookie out of Eastern Washington. Webster had a very productive senior campaign, hauling in 84 receptions for 1,379 yards and 11 touchdowns. He also had a standout preseason, leading the Rams in receptions (15) and receiving yards (150). This led to him making the initial 53-man roster.

Webster was inactive for the Rams’ first five games of the season, and he was waived by the team in mid-October. He subsequently landed with the organization’s practice squad.