LaRoy Reynolds‘ tenure with the Patriots lasted a bit more than two months. The team announced that they released the veteran linebacker/special teamer today. The 30-year-old was released with an injury settlement. 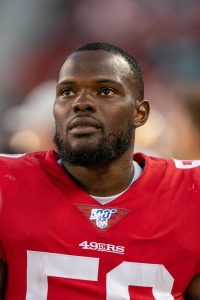 Despite going undrafted out of Virginia in 2013, Reynolds has managed to put together an eight-year career. In stints with the Jaguars, Bears, Falcons (two stints), Eagles, 49ers, and Bengals, the veteran has collected 117 tackles, with most of those coming on special teams. He appeared in 315 snaps for the Falcons in 2020, including 275 on special teams. He finished the season with 12 tackles, one forced fumble, and one fumble recovery.

The Patriots inked Reynolds to a one-year, $1.5MM deal back in March, and the journeyman was expected to serve as one of Bill Belichick‘s beloved special teams aces. Instead, Reynolds will be hitting free agency for the second time this offseason.

With the move, the Patriots have opened up a roster spot, and they’ll soon open another spot when they officially process Patrick Chung‘s retirement. The Patriots could use these spots to add an undrafted free agent or two, as their previous roster constraints only allowed them to add one rookie after the draft.