The Panthers have re-signed running back Cameron Artis-Payne, according to his agents at Element Sports Group. Artis-Payne will provide support on the Panthers’ RB depth chart, behind starter Christian McCaffrey. 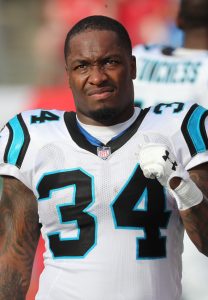 Artis-Payne has had some success running the ball in limited snaps with the Panthers. In 2015, his first NFL season, Payne averaged 4.1 yards per carry off of 45 tries. His reps fell off from there, but he still boasts a respectable 4.2 yards per tote average.

He might not get a ton of opportunities in 2019 either, given the way McCaffrey performed last year. As an NFL sophomore, McCaffrey nearly totaled 1,110 yards on the ground with seven touchdowns. He also added 107 catches, 867 yards, and six receiving touchdowns, positioning him as the Panthers’ bell cow.

After Kenjon Barner left for the Falcons, the Panthers have just two other RBs under contract in Elijah Hood and Reggie Bonnafon.

A number of mid- to late-round draft picks have agreed to terms with their respective teams so far today. Here’s the list of draftees who have been locked up by their teams, along with four-year contract information, via Over The Cap: