Ravens cornerback Tray Walker has died as a result of serious injuries sustained in a Thursday night motorcycle accident, according to his agent, Ron Butler (Twitter link via Jeff Zrebiec of the Baltimore Sun). Walker was 23 years old.

According to the Miami-Dade Police Department, Walker was headed westbound on Northwest 75th 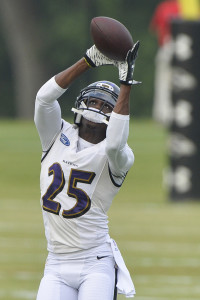 Street on a dirt bike when he collided with a Ford Escape heading southbound on Northwest 21st Avenue. Police said Walker’s bike didn’t have lights and that he was wearing dark clothing.

Walker was in critical condition as of Thursday night at Miami’s Jackson Memorial Hospital. He was reportedly in surgery all night and spent Friday “fighting for his life” after suffering serious head injuries, per Ian Rapoport of NFL.com (Twitter link).

Walker, a former Texas Southern standout, was a fourth-round pick last spring. He played sparingly for the Ravens during his rookie season, seeing some time on special teams but appearing in just eight defensive snaps. As Luke Jones of WNST.net tweets, Walker had dedicated his rookie year to his father, who passed away in November of 2014.

”He loved his college, his teammates, coaches. He was big in terms of giving back,” Butler said (Twitter link via Aaron Wilson of the Houston Chronicle).

“Tray was a young man with a good and kind heart,” said Harbaugh. “He was humble and loved everything about being part of the Ravens’ team.”

Added quarterback Joe Flacco, “Tray was a young man who was full of energy and promise. This is very hard to wrap my head around, and I am devastated” (link via ESPN’s Jamison Hensley).

The Ravens organization and many of its players took to Twitter after the news of Walker’s passing to express their sadness.

“We are grieving the loss of a special young man. #RIPTrayWalker,” the club tweeted.

“I just heard the news.. I can’t believe it. I was just with him two weeks ago. That was like my little bro. RIP Tray Walker,” said receiver Marlon Brown.

PFR sends its condolences and best wishes to Walker’s family and friends.

Ravens cornerback Tray Walker is in critical condition at Miami’s Jackson Memorial Hospital after having been seriously injured in a motorcycle accident on Thursday night, a team spokesman said (link via Jamison Hensley of ESPN.com). According to Ian Rapoport of NFL.com (via Twitter), Walker spent all night in surgery and is “fighting for his life.”

“Oh, my God, this is devastating news,” head coach John Harbaugh said in a statement late Thursday night. “Our prayers and hopes are with Tray and his family tonight.”

According to the Miami-Dade Police Department, via Hensley, Walker was headed westbound on Northwest 75th Street on a dirt bike when he collided with a Ford Escape heading southbound on Northwest 21st Avenue. Police said Walker’s bike didn’t have lights and that he was wearing dark clothing.

A fourth-round pick in 2015, Walker played sparingly for the Ravens during his rookie season, seeing some time on special teams but appearing in just eight defensive snaps.

Our thoughts and best wishes go out to Walker and his family.

Bucs defensive tackle Gerald McCoy is high on rookie quarterback Jameis Winston, as Jenna Laine of Sports Talk Florida writes. However, he says the real test of his abilities is yet to come. “He’s a first-overall pick. Of course you see the talent,” McCoy said of Winston. “You’ve got to give it some time, guys. Everything is real basic right now. Until we put on pads and I can actually chase him, then I’ll tell you how good he is.”

Cowboys cornerback Orlando Scandrick is allegedly unsatisfied with the modest $1.5MM base salary he’s set to earn in 2015, and didn’t report to the club’s voluntary offseason program this week in the hopes of pushing for a new deal. While it’s possible the Cowboys relent at some point, EVP/COO Stephen Jones – appearing on 105.3FM in Dallas yesterday – didn’t make it sound like that would happen anytime soon, writes Jon Machota of the Dallas Morning News.

“He’s under contract, but not unlike a lot of players, they’d like to have more,” Jones said. “Orlando is under contract. If something makes sense for us to add some years or do something then we’ll take a look at that, but we just re-did Orlando’s contract a couple years ago and he’s been a really good football player for us. He’s a leader on this team, and we certainly need him out here. In my mind, he should be out here right now, working out.”

While we wait to see how the Scandrick saga plays out, here are a few more items from around the league’s two East divisions:

It would be a little surprising to see the Jets take a receiver with the sixth overall pick after signing Eric Decker and trading for Brandon Marshall during the last two offseasons, but the team is bringing in wideout Amari Cooper today for a pre-draft visit, reports Manish Mehta of the New York Daily News (via Twitter). With Cooper viewed as a near lock to be selected in the top 10, it’s more likely the Jets are doing due diligence and keeping their options open rather than making the Alabama product a priority.

Here are some details on several more pre-draft visits around the NFL: