DE Michael Johnson Not Expected To Return To Bengals

The Bengals are not expected to bring back longtime defensive end Michael Johnson, the Cincinnati Enquirer’s Paul Dehner Jr. writes. 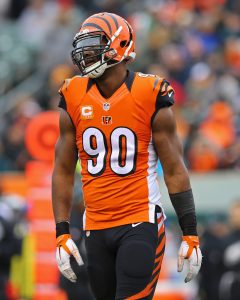 Before the start of the 2018 season, the Bengals released the veteran defensive end only to bring him back on a one-year contract the next day. Johnson filled a big role on the Cincinnati defensive line, soaking up 41 percent of the team’s defensive snaps and starting all 15 games he played in. With Carlos Dunlap, and the emergence of Sam Hubbard, Carl Lawson and Jordan Willis, Johnson was deemed as expendable.

A third-round pick in 2009, Johnson began his career with the Bengals and developed into a solid starter in a five-year run with the team that included an 11.5-sack season in 2012. He moved to Tampa Bay following the 2013 season but spent just one season with the Buccaneers before returning to the Bengals. Since rejoining the team in 2015, Johnson has started 61 of a possible 64 games.

In his 10th season, Johnson was graded as the No. 89 edge defender by Pro Football Focus, a middle-of-the-road mark. His veteran presence and proven production could make him an attractive piece for a team needing a complementary 4-3 defensive end. In 2018, Johnson registered 33 tackles and just a half-sack in 15 games. He did record an interception and his first career touchdown in Week 5 vs. the Dolphins.

Bengals defensive end Michael Johnson will miss a “few” weeks after suffering a knee injury in Thursday night’s contest against the Ravens, according to Ian Rapoport of NFL.com (Twitter link). Geoff Hobson of Bengals.com reports Johnson suffered a sprained MCL.

Johnson is a starter for Cincinnati, although he doesn’t typically play a full complement of snaps given that the Bengals often deploy sub-package rushers. With Johnson sidelined, those backups — including Carl Lawson, Jordan Willis, and rookie Sam Hubbard — will now be called on to see more action. Johnson also occasionally moves inside to defensive tackle on pass downs, so the Bengals will need to find a replacement for that role (both Willis and Hubbard are capable of shifting inside).

Johnson was nominally released by the Bengals at final cutdowns, although the transaction was simply a procedural move. Cincinnati wanted to keep rookie cornerback Davontae Harris on its initial roster so it would be able to place him on injured reserve/designated to return. So Johnson was released with the knowledge that he’d be re-signed the following day, and his new contract features the exact same salary he was originally set to collect.

Johnson, a second-round pick of the Bengals in 2009, has been with Cincinnati for every season of his NFL career save for 2014, which he spent with Tampa Bay. The 31-year-old has appeared in 142 total games (106 starts), posting 44 sacks during that time.

The Bengals will re-sign defensive end Michael Johnson after releasing him on Saturday, tweets Paul Dehner Jr. of the Cincinnati Enquirer. It’s a one-year deal for Johnson, who was not forced to accept a pay cut from his previous salary.

Johnson had been a Bengals starter in five of the past six seasons, but third-round selections of Jordan Willis and Carl Lawson last year — along with 2018 third-rounder Sam Hubbard — made the 31-year-old talent a less important commodity. Johnson registered five sacks last season and has 44 in his career.

Now that he’s back in the fold, Johnson is likely to see action at both defensive end and tackle, the latter in nickel situations.

A day after releasing a statement indicating that he doesn’t want to be traded and that his absence from OTAs is simply about securing his future with the Vikings, Adrian Peterson took to Twitter to rant about NFL contracts. While many of the running back’s broader points – involving the lack of agency players have compared to teams when it comes to getting out of contracts – are accurate, it’s difficult to have any sympathy for Peterson, given the circumstances.

Peterson, after all, is poised to enter his age-30 season as the NFL’s highest-paid running back, and the Vikings appear entirely willing to pay him that $12.75MM salary rather than asking him to reduce it, despite the fact that the 30-year-old was investigated for child abuse last year. While many players could rightly gripe about teams failing to honor contracts, the rhetoric doesn’t sound very effective coming from Peterson right now.

Let’s check out a few more items from across the NFC North….

We took a look at ESPN.com’s NFC mailbags earlier this morning. Let’s now shift our focus to the AFC…

10:08am: The Bengals and DE Michael Johnson have agreed to terms, according to ESPN’s Adam Schefter (via Twitter). Ian Rapoport of NFL.com tweets that it is a four-year deal.

It will be a homecoming of sorts for Johnson, who was drafted by Cincinnati in the third round of the 2009 draft. The Georgia Tech product played for the Bengals for five seasons before signing a five-year, $43.75MM deal with the Buccaneers last offseason. Tampa Bay released Johnson just a few days ago, saving themselves $2MM of cap room and setting the stage for Johnson’s reunion with Cincinnati. Rapoport (via Twitter) adds that Johnson made $16MM during his one year in Tampa Bay, and there are no offsets in his contract, so whatever he earns from the Bengals will be in addition to that $16MM figure. As Jason La Canfora of CBS Sports tweets, Johnson was already due $7MM from the Buccaneers and is now set to make around $14MM in 2015 alone.

Johnson had a breakout season in 2012, contributing 11.5 sacks and grading out as the 14th-best 4-3 defensive end according to Pro Football Focus’ advanced metrics (subscription required). He combined with Carlos Dunlap to form an imposing pair of bookends along the Bengals’ defensive line. Cincinnati put the franchise tag on Johnson after the 2012 campaign, and although his sack totals fell off considerably in 2013, PFF listed him as the 4th-best 4-3 DE in the league, largely as a result of his excellent play against the run. The performance made him a hot commodity last offseason, and he ultimately signed with Tampa Bay as the Buccaneers looked to bolster their front seven.

But Johnson’s lone season in Tampa was disappointing to say the least. He accrued just four sacks and even his run defense full off a cliff as he finished near the bottom of the league’s defensive ends per PFF. However, his talent is undeniable, and the Vikings recently brought him in for a visit that by all accounts left both sides with a good feeling. In the end, though, the attraction of playing for his original club was just too much. As Johnson said, “[Cincinnati] is my home. I feel like outside of Selma (Johnson’s Alabama hometown) this is my home” (Twitter link to Chris Tomasson of the St. Paul Pioneer Press).

Cincinnati, meanwhile, gets a quality player who should bring a lift to its defensive line, and a player who the team knows will fit into its system. Furthermore, the Bengals will get a third-round compensatory choice for losing Johnson last season, even though he is now back on the team, and because he was re-acquired after having been released, he will not count against the team’s compensatory pick formula next year. All in all, Johnson and the Bengals appear to have made out very well today.