The Chargers have been without Keenan Allen since he suffered a hamstring injury during the team’s season opener. While he has yet to officially be ruled out for Monday night’s game against the Broncos, it appears his return will come no earlier than Week 7.

The 30-year-old said as much when speaking to NFL Network’s Bridget Condon. Allen was expected to be on the field by this point in the season after suffering the injury, but a setback pushed his recovery timeline into October. “I wouldn’t say it was going well,” Allen said of his first rehab attempt. “I think I pushed a little too fast. I wasn’t ready obviously and reaggravated it.”

Here are some other injury updates ahead of tomorrow’s action:

The Packers have had a more eventful offseason than nearly every other team in the league. One of the results of their moves is a decided lack of proven commodities at the receiver position, something which sparked quarterback Aaron Rodgers‘ recent comments about the improvement which needs to be made amongst some of their new pass-catchers.

“The young guys, especially young receivers, we’ve got to be way more consistent,” the reigning MVP said, via PFF’s Doug Kyed. “A lot of drops, a lot of bad route decisions, running the wrong route. We’ve got to get better in that area.”

Per Kyed, Rodgers has stated they he wants Allen Lazard to operate as the “top option,” something which doesn’t come as much of a surprise given his NFL resume. Rodgers’ preference would be for Lazard to be joined as a starter by veterans Sammy Watkins and Randall Cobb – a trio which would include, by far, the most experience available. However, rookies Romeo Doubs (who has seen first-team reps) and Christian Watson (whom the Packers traded up to select in the second round) could unseat Watkins and/or Cobb, leaving the team with more upside – but less certainty – at an important position as they look to contend for a Super Bowl.

Here are some more WR notes from around the league:

Nelson Agholor is parlaying his quality Raiders season into a deal with the Patriots. New England is expected to land the former first-round pick in free agency, Ian Rapoport of NFL.com tweets. Once finalized, it’ll be a two-year deal worth up to $26MM, per ESPN.com’s Adam Schefter (on Twitter). 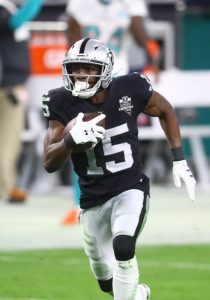 This news comes after the report indicating the Pats were discussing a deal with Kendrick Bourne. As of now, it is uncertain if the Pats will add both. But they are signing Agholor, with Rapoport tweeting the deal is done. Agholor’s base value will be $11MM per year, Mike Garafolo of NFL.com tweets. Incentives could move it up to the aforementioned $13MM-AAV price.

Agholor was inconsistent during his Eagles tenure, but the former first-round pick proved essential during Philadelphia’s Super Bowl LII march. And, in 2020, he enjoyed a solid season with the Raiders, tallying 48 grabs for 896 yards and eight touchdowns. It was opportune timing for Agholor, who erased memories of a 2019 slate marred by a knee injury.

Before the Texans dealt DeAndre Hopkins to the Cardinals, the Patriots pursued the All-Pro wideout. So did the Eagles, Adam Schefter of ESPN.com said during an interview with Philadelphia’s 97.5 The Fanatic (Twitter link). The Eagles passed on going deep into talks, however, which makes sense given their commitments to Alshon Jeffery and DeSean Jackson. Hopkins also wants a new deal in the $20MM-per-year range, in which Amari Cooper (zero All-Pro honors). The Eagles’ view of the much-hyped 2020 wide receiver class affected a potential Hopkins pursuit, Tim McManus of ESPN.com adds.

This impacted the Texans’ trade, with Albert Breer of SI.com adding that Hopkins wanted a raise instead of an extension. He is under contract through 2022 — on a $16.2MM-per-year deal that has dropped from first to eighth among wide receivers. Hopkins had also become a bit of a locker room issue in Houston, per Breer, who adds that the Texans may have been reluctant to reward the 27-year-old star because of the message it would have sent. This process came as a bit of a surprise to the Cardinals, whom Breer notes did not engage in Hopkins discussions with the Texans at the Combine.

Here is the latest from the wideout front, moving first to last week’s other big trade:

The Raiders continue to make additions in the opening days of free agency, and they will add a wide receiver who played a key role for a Super Bowl champion.

This marks an interesting move for Las Vegas, which has been linked to high-end free agent wideout Robby Anderson and has been deficient at the position since Antonio Brown‘s drama tour involved a release from Oakland. Agholor was inconsistent during his Eagles tenure, but the former first-round pick proved essential during Philadelphia’s Super Bowl LII march.

The USC product surpassed 700 yards in both the 2017 and ’18 seasons, helping Carson Wentz emerge as one of the game’s most promising young players. Working mostly as a slot target in Philly, Agholor combined for 12 touchdown grabs in those seasons. He caught a game-high nine passes for 84 yards in the Eagles’ Super Bowl victory.

However, Agholor failed to eclipse 400 yards in his other three seasons and is coming off a 2019 slate marred by a knee injury. The ailment kept Agholor out of Philadelphia’s first-round playoff game, but he caught just 39 passes for 363 yards in 10 games last season. As a result of the down campaign, the 2020 season will double as a value-reviving opportunity for the once-coveted prospect.

The Raiders picked up Tyrell Williams‘ 2020 option and have Hunter Renfrow established as their slot receiver. Former second-round pick Zay Jones also remains on Las Vegas’ roster. The Raiders still figure to make a splashier addition to their receiving corps this offseason, but Agholor profiles as an interesting flier.

The Redskins and Ron Rivera are making a historic hire. Washington is hiring Jennifer King as an offensive assistant, a source told Adam Schefter and David Newton of ESPN.com (Twitter link). The news of the potential hire was first reported by Rhiannon Walker of The Athletic (Twitter link). King will now be the first full-time African American female assistant coach. As Schefter points out there’s some familiarity here, as Rivera had hired King as a summer intern when he was with the Panthers. It furthers a trend we’ve seen developing the past couple of years, as women continue to make more inroads into the coaching ranks. Buccaneers coach Bruce Arians has been a champion of female coaches, and he hired two women to full-time coaching positions on his staff before last season. King also coached with the Arizona Hotshots of the short-lived AAF.

Eagles’ Nelson Agholor Out Vs. Seahawks

The Eagles will face the Seahawks without the services of Nelson Agholor. The wide receiver’s knee injury will sideline him for the opening round of the playoffs, head coach Doug Pederson announced.

Agholor has not played since suffering a knee injury in Week 13. Before that, he caught 39 passes for 363 yards and three touchdowns in eleven games.

“Zach [is] still not cleared for any contact,” Pederson said. “He will work a little bit on the side again like he’s done this week and stuff like that, but we’re waiting on a few doctor results tomorrow. If things go favorable, he’ll play. If they don’t, he won’t.”

The Eagles can get by without Agholor, but it won’t be easy for Carson Wentz to move the chains or convert in the red zone without Ertz. The tight end caught 88 passes for 916 yards and six touchdowns this season, giving him his third-straight Pro Bowl nod. Ertz is known for his toughness, but doctors won’t let him take the field unless his broken rib and lacerated kidney show drastic improvement.