J.K. Dobbins returned to practice today, with the running back hoping to make his long-awaited return to the field this Sunday. The Ravens running back admitted that his injury “wasn’t just a normal ACL,” with Dobbins explaining that he tore his ACL, LCL, hamstring, and meniscus at the end of the 2021 preseason (per ESPN’s Jamison Hensley on Twitter). It’s been just over a year since Dobbins suffered his injury.

“It would mean the world to me if I can go out there this Sunday and play well in front of a full house,” Dobbins said (via Hensley).

Fellow running back Gus Edwards also missed the entire 2021 season with a torn ACL, but thanks to his placement on PUP, he’ll have to sit out the first four games of the season. Still, Edwards took to Instagram to tell fans that he continues to progress in his recovery and eventual return to the field.

“For everybody wondering about my recovery I’m doing great and I’m very close,” Edwards wrote.

More injury notes from around the AFC…

9:50pm: In a postgame interview, Allen claimed he “possibly” can play in Week 2 after today’s hamstring injury, according to Lindsey Thiry of ESPN. When reminded that the Chargers have a short week before their Thursday night matchup in Kansas City, Allen amended his “possibly” to a “small possibly.”

6:54pm: Los Angeles was rolling on offense before veteran wide receiver Keenan Allen left the game in the first half with an apparent hamstring injury. Allen pulled up in the middle of running a route, grabbed him hamstring, and limped directly off the field and to the blue medical tent. After initially being announced as questionable to return, he was quickly downgraded to “out,” according to Bridget Condon of NFL Network. 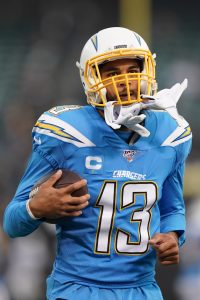 Allen was a huge part of the Chargers’ early success on Sunday, reeling in four catches for 66 yards in less than two quarters of football. Without Allen in the second half, Los Angeles’ offense grew stagnant, allowing the Raiders to claw their way back into the game.

In Allen’s absence, quarterback Justin Herbert had to really spread out his targets. Newly re-signed Mike Williams is the obvious answer to step up with Allen out, but the Las Vegas defense mobbed Williams for much of the remainder of the game, forcing Herbert to find other targets to pass to. The running backs and tight ends got heavily involved in the passing game with Gerald Everett, Tre’ McKitty, Austin Ekeler, Joshua Kelley, and Zander Horvath reeling in 14 receptions between the five of them.

Allen has been with the Chargers for nine years dating back to their time in San Diego. Even with Williams hot on his heels, Allen has been the leading receiver for the Chargers in every healthy season of his career, except for last season when Williams outgained Allen by eight yards. It’s unknown how much time Allen is expected to miss, but, in the meantime, the Chargers will count on wideouts DeAndre Carter, Joshua Palmer, and Jalen Guyton to open up the field for Williams.

While quarterbacks’ salaries will continue to lead the way, a handful of blockers and skill-position players carry sizable cap numbers for 2022. A few of the quarterbacks that lead the way this year may not be tied to those numbers once the regular season begins. The 49ers, Browns and Ravens have made efforts to alter these figures via trades or extensions.

Here are the top 2022 salary cap hits on the offensive side of the ball:

Contract information courtesy of Over The Cap

One of the top remaining franchise tag candidates has signed an big-money contract. The Chargers have inked Mike Williams to a three-year, $60MM deal, according to ESPN’s Adam Schefter (Twitter link). $40MM of the total is fully guaranteed. 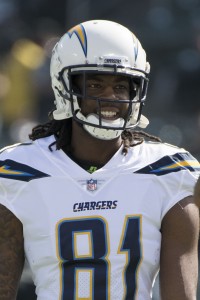 The Chargers had made it clear they were willing to tag Williams, though a long-term deal was always the preference. The 27-year-old played out last season on the fifth-year option, which earned him $15.7MM. Given his play during the campaign, it became clear a significant raise would be coming.

Williams posted 76 catches and 1,147 yards – both career highs. He also registered nine touchdowns, the second-highest total of his NFL tenure. Alongside Keenan Allen, he played a major role in the Chargers ranking second in the league in passing yards, while finishing top-five in scoring. This deal means that both Williams and Allen will next become free agents in 2025.

The $20MM per-year average is almost exactly what the franchise tag ($19.1MM) would’ve cost the Chargers in 2022 anyway, though Schefter notes that the first year of the deal includes $28MM. Unlike so many other teams, cap space was hardly an issue for Los Angeles; they entered the day with more than $56MM to work with for the upcoming season. This deal obviously takes a large bite out of that, but the medium-term pact should provide solid value for the team.

The main pieces to the Chargers’ passing attack will remain in place, something which is likely a necessity to compete in the AFC West. In a division already featuring Patrick Mahomes – and that just saw the arrival of Russell Wilson – points will need to be scored early and often to keep up.

Four years ago today, Chargers wide receiver Keenan Allen scored a seismic pay bump. After months of negotiations, the former third-round pick agreed to a four-year add-on worth $45MM with nearly $21MM fully guaranteed at signing. Before that, Allen was playing on his rookie deal – a four-year pact worth just $2.8MM in total.

Few could dispute Allen’s value to the Bolts. As a rookie in 2013, Allen eclipsed 1,000 yards receiving and scored eight touchdowns. He back down to earth in 2014, but he was on pace for the best season of his career – 67 receptions and 725 yards through only eight games, before a lacerated kidney forced him off the field. With a clean bill of health for 2016, and his 25th birthday still on the horizon, the Chargers were happy to lock Allen down for several years.

Allen’s $11MM+ average annual salary put him in the top ten at his position at the time, appropriately slotting him ahead of Jaguars receiver Allen Hurns, who had just inked a four-year, $40MM deal. From the Chargers perspective, it was a short-term cap saver – it would have cost the team $15MM to keep him for an extra year via the franchise tag.

Unfortunately, Allen’s 2016 did not go according to plan as he suffered an ACL tear in the first half of the team’s very first game. But, after that, it was mostly smooth sailing – Allen went off for nearly 1,400 yards in 2017, giving him his first of three consecutive Pro Bowl nods.

Allen is once again set to enter his walk year as his four-year extension wraps up. And, once again, he’s in position for a pay raise.

A semblance of past injury-related storm clouds are creeping onto the Chargers’ radar. Derwin James may be an IR-return candidate, and one of the contending team’s other top players will miss time as well.

Keenan Allen is expected to miss the remainder of the Bolts’ preseason slate, with Adam Schefter of ESPN.com reporting (via Twitter) the Pro Bowl wide receiver suffered an ankle injury in practice this week. This marks the second setback Allen has suffered during camp. The seventh-year wideout also ran into knee trouble during the Chargers’ joint practices with the Rams, per The Athletic’s Daniel Popper (on Twitter).

This being the Chargers, who have lost several key players to severe early-season injuries in recent years, concern is natural. But Schefter cautions Allen’s ankle ailment is not considered serious. He is expected to be ready in time for the team’s opener against the Colts.

Allen has done well to shake the injury concerns that plagued his mid-2010s run. He missed 23 games between the 2015 and ’16 seasons, the latter instance because of a Week 1 ACL tear. With Tyrell Williams now gone, the Bolts’ receiving corps is now thinner and would be less equipped to withstand an Allen absence. But the 27-year-old standout has not missed a game over the past two seasons.

The Chargers picked up their biggest win of the season last night against the Chiefs, but they didn’t escape Kansas City unscathed. Already dealing with injuries to running backs Austin Ekeler and Melvin Gordon, they suffered another blow when star receiver Keenan Allen went down in the first half. Allen never returned to the game, and now we have an update on his status. Allen has been diagnosed with a hip pointer, according to Ian Rapoport of NFL Network (Twitter link). While it is a somewhat significant injury, Rapoport notes there is no structural damage to his hip. He writes that it isn’t a longterm injury, and although he says he could “miss some time” it sounds like Allen will be back in time for the playoffs at the absolute latest.