Ravens All-Pro left tackle Ronnie Stanley has only appeared in one game since injuring his ankle in November of 2020. Fortunately, it sounds like the lineman could soon be back on the field, as head coach John Harbaugh gave a positive on the lineman’s status.

“Ronnie’s ankle is looking great,” Harbaugh said (via Clifton Brown of the team’s website). “Ronnie’s mission right now will be to get in the best shape of his life and get ready to play football, and that’s what he’s working on.”

Stanley suffered a severe ankle injury during Week 8 of the 2020 season. He tried to return for the 2021 campaign, and after appearing in 100 percent of his team’s offensive snaps in Week 1, he ultimately decided to opt for more surgery. Prior to his injury, Stanley was among the top left tackles in the NFL, with Pro Football Focus consistently ranking him among the best at his position. The team’s primary goal is to have the veteran ready for Week 1, per Brown.

“I expect him to play like Ronnie Stanley,” Harbaugh added. “He’s really motivated to do it. Just talked to him again today. He’s chomping at the bit to get back. If he plays like Ronnie Stanley, and even better, than the significance is almost immeasurable. And that’s what we’re hoping for.”

More out of Baltimore…

The Ravens tried to sign LB Bobby Wagner, the former Seahawks star who was released by Seattle last month. On March 28, we heard that Baltimore had submitted an offer that it believed was “very competitive” vis-à-vis the proposal that Wagner received from the Rams, and Mike Florio of Pro Football Talk reported yesterday that the Ravens had offered a two-year, $18MM contract.

At first blush, that looks to be a far cry from the five-year, $50MM deal Wagner ultimately signed with Los Angeles. But we are still awaiting details on the structure of that agreement, and Florio hears that Wagner will get paid $17MM over the first two years of the deal, with “small guarantees” in the second year. If that’s the case, then the Ravens’ offer — the structure of which is also unknown — may well have been as competitive as the team thought. Perhaps Wagner, an LA native, simply wanted to stay home and play for the defending champions.

Baltimore, meanwhile, has now had near misses with Wagner and Za’Darius Smith in recent weeks, leaving the club with plenty of work still to do in the front seven.

Now for several more items out of Charm City:

7:12pm: Edwards’ ACL tear has been confirmed. Schefter reports (via Twitter) that the Ravens running back indeed suffered the season-ending injury. The organization will soon have three RBs sitting on IR.

6:58pm: The Ravens will be without at least one of these starters this season. Peters’ MRI confirmed an ACL tear, Adam Schefter of ESPN.com tweets. This will be the All-Pro corner’s first significant injury as a pro. Edwards’ tear has yet to be confirmed.

Peters and Edwards went down on consecutive plays, and Jeff Zrebiec of The Athletic notes (via Twitter) team is concerned the maladies are severe. Indeed, the Ravens fear both players suffered ACL tears, Rapoport adds (on Twitter). Each is undergoing tests. Both injuries are believed to be of the non-contact variety, NFL.com’s Peter Schrager tweets. 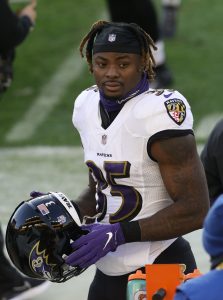 Edwards is the last man standing among Baltimore’s running backs, at least among those on last year’s squad, while Peters is entering his third season as a key Baltimore starter. The Ravens have already lost starting running back J.K. Dobbins and third-year reserve Justice Hill for the season.

Baltimore is down to second-year UDFA Ty’Son Williams at running back. Williams, interestingly, has worked his way back from an ACL tear sustained during the 2019 season while at BYU. The Ravens signed veteran special-teamer Trenton Cannon on Wednesday and have Le’Veon Bell stashed on their practice squad. Both moves take on greater importance after this Edwards development.

The Ravens are already set to begin their season without first-round pick Rashod Bateman, who is on IR after suffering a groin injury that required surgery early in training camp. Edwards was set to be Baltimore’s starter, after three straight seasons of 700-plus rushing yards north of 5.0 yards per carry. The Ravens extended the former UDFA back on a three-year, $12.38MM deal earlier this summer.

Peters signed a three-year, $42MM extension near the end of his first season in Maryland. He has been the NFL’s top turnover producer during his six-year NFL tenure. The former Chiefs first-round pick and Rams Super Bowl starter is going into his age-28 season. In 23 Raven games, Peters already has seven interceptions and four forced fumbles. Peters’ deal runs through 2022.

Beyond Bell and Cannon, the Ravens could certainly reach out to Latavius Murray, whom the Saints just released after he refused a pay cut. Todd Gurley is also available, joining Kerryon Johnson, Lamar Miller, Alfred Morris and Adrian Peterson in that regard. Replacing Peters would be much tougher for the franchise. The Ravens do possess some cornerback depth, however, with 11th-year veteran Jimmy Smith still in place behind boundary starters Peters and Marlon Humphrey. Smith, however, missed a few weeks of practice after suffering a sprained ankle during camp.

Here are the details from the latest contracts agreed to around the NFL:

The Ravens have agreed to a brand new deal with Gus Edwards. The running back now has a fresh two-year, $10MM contract, tying him to the club for multiple seasons.

Edwards has been a big part of the Ravens’ dynamic ground game, averaging at least 5.0 yards per carry in each of his three pro seasons. This past season, he suited up for all 16 games and made six starts, rushing for 723 yards and six touchdowns. With Mark Ingram now out of the picture, Edwards is set to split carries with second-year player J.K. Dobbins.

The Ravens retained him as a restricted free agent in March, cuffing him for around $3.4MM with the second-year tender. Instead, they’ve extended the arrangement. It’s a smart move — the Rutgers product is now poised to do career numbers with a larger role in the offense.

The Ravens are prioritizing new deals for their young stars, which helps to explain why they backed out of their recent trade talks for Juli0 Jones. Without Jones and his $15MM salary to tangle with, they’ve got the necessary funds to keep players like Edwards and key in on a megadeal for star quarterback Lamar Jackson.

The Ravens’ ground game has been dynamic over the past couple of years, and they’re not going to let a key piece of that get away. Baltimore has placed a second-round tender on restricted free agent Gus Edwards, a source told Adam Schefter of ESPN.com (Twitter link).

The second-round tender will be worth around $3.4MM this year, so it’s a nice payday for Edwards. It also means that any team that wants to sign Edwards to an offer sheet would have to give up a second-round pick, which virtually guarantees he’ll be back with the Ravens next year. Since Edwards is a former UDFA, had they tendered him at the original-round level, opposing teams wouldn’t have had to give anything up to poach him.

That original-round tender would’ve paid about $2.1MM, so it’s a better than 50 percent increase for Edwards. The Rutgers product started off on the practice squad in 2018 but quickly moved up to the active roster and even started six games that year.

Impressively, he’s averaged at least 5.0 yards per carry in each of his three pro seasons while carrying the ball at least 133 times in each of those. This past season in 16 games and six starts, he rushed 144 times for 723 yards and six touchdowns. With Mark Ingram out of the picture now, Edwards will be back splitting carries with second-year player J.K. Dobbins in 2021.