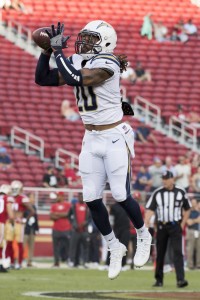 The Chargers have added some depth and experience to their defense backfield, as the team announced that they’ve signed veteran safety Dwight Lowery to a three-year contract.

The journeyman had one of his best seasons in 2015 with the Colts. The 30-year-old started all 16 games, finishing with 76 tackles, one sack, four interceptions, and nine passes defended. The eight-year veteran also spent time with the Jets, Jaguars, and Falcons, compiling 266 tackles, five sacks, and 16 interceptions throughout his career.

Despite his apparent improvement this past year, Pro Football Focus wasn’t particularly fond of his performance. Lowery ranked 49th among those at his position, although he was the Colts’ highest-rated safety. He ranked eighth in our list of the top free agent safeties.

The Colts have agreed to terms of a contract with safety Dwight Lowery, reports Mike Wells of ESPN (via Twitter).

Lowery had visited with the Colts earlier this week. He played in 2014 with the Falcons, recording a career high 85 tackles and intercepting two passes in 15 starts, writes Mike Chappell of RTV6 (via Twitter).

Lowery also spent time with the Jaguars and Jets, playing both safety and corner during his career. He had been effective more often than not in both of his first two stops, although experienced limited playing time, according to Pro Football Focus (subscription required). He still graded out slightly positive in his first full year as a starter in 2014.

One of the last of our top 50 free agents who is still without a deal, center Stefen Wisniewski has seen his market move slowly in part because he underwent shoulder surgery this offseason to repair a torn labrum. However, things may be picking up for the former Raider.

According to Albert Breer of the NFL Network (via Twitter), Wisniewski visited the Patriots earlier this week, and Adam Caplan of ESPN.com tweets that the center visited the Jaguars today. There’s no deal with either team in place yet, but it could just be a matter of time until Wisniewski find a new home.

Here’s more on Wisniewski and a few other free agents:

With free agency set to open in a matter of hours, the Giants are zeroing in on a running back scheduled to his the open market later today, reports Ralph Vacchiano of the New York Daily News. According to Vacchiano, the team is “very serious” about trying to sign Shane Vereen, with one source suggesting it’s possible a deal could get done shortly after the market opens at 3:00pm central time. The report echoes what we heard last night from Albert Breer of the NFL Network, who classified the Giants’ interest in Vereen as “significant.”

As we wait to see whether the Giants can get anything done with the longtime Patriot, let’s check in on a few more Tuesday morning free agency updates….