The Texans plan to sign defensive end Antonio Smith on Wednesday after placing J.J. Watt on injured reserve, according to Adam Schefter of ESPN.com (Twitter link). It will be a one-year deal, per Mike Florio of Pro Football Talk (Twitter link). Smith played for Houston 2009-13. 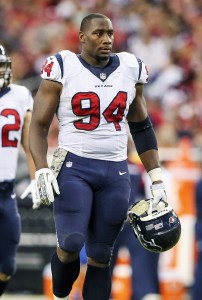 Smith, 35 next month, is an 12-year NFL veteran with more 170 appearances and 130 starts under his belt. In 2015, he played in all 16 games for the Super Bowl champion Broncos, posting 2.5 sacks in the process. During the course of his career, Smith has spent time with the Cardinals, Texans, Raiders, and most recently, Denver. He’ll factor into a Houston defensive end crew that contains Jadeveon Clowney, Joel Heath, Devon Still, Christian Covington, and Brandon Dunn.

Watt, meanwhile, will visit a specialist to learn if his back injury will require surgery or if it can heal on its own, tweets Mark Berman of FOX 26. Either way, Watt will be forced to miss a minimum of eight weeks before he can return from IR.

The Titans‘ meeting today with Chiefs executive Chris Ballard is expected to be the last interview the team conducts in its search for a new general manager, per Jason Cole of Bleacher Report (video link). Whether that means a hiring will follow shortly thereafter remains to be seen. With NFL team owners gathering in Houston for the next couple days, it’s possible Tennessee will wait until later in the week to make and announce a decision on its new GM.

Once that new GM is in place, the Titans will begin their head coaching search in earnest. According to Cole, the club wants to fight the perception that it’s a dysfunctional franchise, which means going through the general manager hiring process before rushing into a head coaching search, to assure the new GM is on board with the new coach, and vice versa.

Facing a suddenly thin defensive end situation, with Derek Wolfe‘s recent PEDs suspension and Malik Jackson‘s calf strain, the Broncos are in need of some good news on their line.

They’ll have to settle for Antonio Smith being able to practice and hoping his being investigated in a child sex-abuse complaint doesn’t deter his time in Denver. The Broncos previously excused him from OTAs in late May once word of this allegation emerged.

“I have faith in the end it’s going to be all right,” Smith told Arnie Stapleton of the Associated Press. “I love football. I love my teammates more than I love the game. To be away from them was definitely a hard situation.”

GM John Elway permitted the 33-year-old end who he signed as a depth piece earlier this offseason to practice since he hasn’t been arrested or charged.

Here’s some more news out of Denver and as well as the Broncos’ AFC brethren’s training camps.

Antonio Smith is still under investigation on a complaint of sexual child abuse, but with no charges filed, the Broncos have decided to allow him to rejoin their team, according to Mike Klis of 9NEWS. The veteran defensive end was dismissed from the team’s offseason workout program after the Broncos learned he was under investigation for child abuse that was “sexual in nature.”

Smith, 33, was signed by Denver to a one-year, $2MM deal this past offseason. Only Smith’s $500K signing bonus is fully guaranteed from that amount, though a violation of the league’s personal conduct policy could put that in jeopardy. Denver excused Smith from voluntary offseason workouts to tend to his personal matters but the club has remained in contact with him over the past two months and they’ll now allow him to partake in training camp.

The 10-year veteran spent last season with AFC West rival Oakland, racking up three sacks (giving him 44.5 for his career), before signing with Denver as a free agent.

“That’s not true at all,” Irsay told Zak Keefer of The Star when asked about a recent assertion made by ESPN’s Sal Paolantonio. “I haven’t talked to Roger Goodell about DeflateGate since late January. Not true. That’s not the way things work involving someone else’s business and someone else’s team. It’s not something I’ve ever seen, and I’ve been around ownership (in the NFL) for half a century.”

Irsay claims his last interaction with Goodell regarding the Deflategate controversy came months before the results of Ted Wells’ investigation were released in May. Here’s more out of the AFC..

With organized team activities getting underway this week, we’re keeping our eye on plenty of contract and roster situations around the NFL. Here are the latest updates on a few of those situations:

The Broncos will have to make a call this week on whether or not they want to keep Antonio Smith on their roster as their organized team activities get underway, writes Josh Alper of Pro Football Talk. Smith is being investigated following a complaint of possible child abuse of a sexual nature, and while that’s a serious allegation, the defensive lineman has yet to be arrested or charged with a crime, so Denver’s decision isn’t as clear-cut as the one the Bears faced with Ray McDonald.

As we wait to see whether or not the Broncos decide to cut ties with Smith, let’s round up a few more notes out of the NFL’s two West divisions….

“I think it makes my job that much more exciting,” Novak said. “There could be games where I may not get any work, just lighting up the scoreboard and scoring touchdowns, which is a good thing. Now, I have the privilege of kicking 33-yard field goals, maybe four of five a game — I call them field goals because they’re from 33 yards. And I may kick four or five (actual) field goals. My workload is going to go up. It’s exciting to showcase what I can do. I think it increases the value of a kicker, too. Accuracy is going to be a (more valued commodity).”

However, now that the two-point scoring incentive is there, Novak is concerned that rushers may make a more concerted effort to block, which could lead to greater injury risk for players. Here’s more out of the AFC West..