With free agent signee T.J. Yates the favorite to act as the Bills‘ backup quarterback behind Tyrod Taylor, and fifth-round pick Nathan Peterman now in tow, Cardale Jones — a fourth-round selection just a year ago — is not a lock to make the Buffalo roster, as Mike Rodak of ESPN.com writes. The Bills are unlikely to keep four signal-callers in 2017, meaning Jones could be the odd man out. “You kind of sit around all day, try to go in there. You wait on your opportunity all day,” Jones said. “Your number is called, and you kind of didn’t take advantage of it.” Jones, 24, appeared in only one game in 2016 (the season finale), during which he completed six of 11 attempts for 96 yards and one interception. For what it’s worth, Buffalo head coach Sean McDermott said Thursday that Jones is “absolutely in the mix” for a roster spot, tweets Vic Carucci of the Buffalo News.

After suffering a leg injury last night which will sideline him for the remainder of the season, Seahawks safety Earl Thomas tweeted that retirement had crossed his mind, and as he tells Ed Werder of ESPN.com (Twitter links), he’s still considering his options. “I’m taking it one day at a time,” said Thomas. “I still feel the same way I felt last night. You have to remember my team is still fighting I don’t want to become a distraction.” One positive is that Thomas won’t require surgery, according to Ian Rapoport of NFL.com (Twitter link), which should ease his recovery and rehab process.

The Cardinals are placing running back Chris Johnson on IR with a groin injury, according to a team announcement. Safety Tyvon Branch is also headed to the IR with the same injury.

In theory, both players could be eligible to return on December 4th for the Cards’ home contest against the Redskins. However, that will depend on the condition of each player and the team will also have to prioritize them against other candidates to return from IR. Each team can have a player return to action after eight weeks, but they can do only do so with one player.

Johnson had 95 yards and one touchdown off of 28 carries this season as he played the backup role behind David Johnson. Andre Ellington, who was once supposed to be the main guy in Arizona, now moves into the No. 2 RB role.

To replace Johnson on the roster, the team officially re-signed running back Kerwynn Williams. Also, with Carson Palmer‘s status in the air (concussion), the team also promoted quarterback Zac Dysert from the practice squad. Versatile wide receiver/defensive back Brittan Golden was promoted from the practice squad to the active roster. In other moves, punter Drew Butler (calf) was waived with an injury settlement and safety Christian Bryant was added to the practice squad. The team still has one opening on the taxi squad.

WEDNESDAY, 8:42am: Butler’s new two-year deal with the Cardinals calls for base salaries of $700K and $1MM, per Kent Somers of the Arizona Republic (Twitter link). Those annual figures fall short of the $1.2MM per-year average initially reported by Getlin, so perhaps there are additional bonuses or incentives that increase the overall value of the contract. Somers notes that the pact doesn’t feature a signing bonus.

MONDAY, 10:50am: The Cardinals have re-signed punter Drew Butler, who had been on track to become a restricted free agent, the team announced today in a press release. According to Rand Getlin of the NFL Network (Twitter link), Butler’s new deal is a two-year contract that pays him $1.2MM annually. 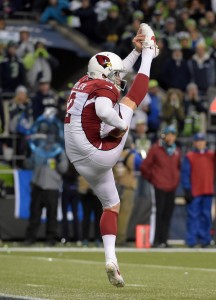 Butler, who started his career with the Steelers, took over as the Cardinals’ full-time punter in 2014 and hung onto the job last season. On 60 attempts in 2015, Butler averaged 42.9 yards per punt, with a 35.4 net-yard average and just six touchbacks. While the 26-year-old figures to enter the 2016 season atop the Cardinals’ punter depth chart, the team could bring in another player to compete with him.

Assuming Getlin’s report on the terms of Butler’s new deal is accurate, it looks like a pretty good price for the Cardinals — a $1.2MM per-year salary barely places Butler within the top 20 highest-paid players at the position, per Over the Cap.

Still, since he had only been eligible for restricted free agency, it makes sense that Butler would be open to accepting an offer that will likely give him a modest guarantee and a little security. Had the Cardinals assigned a low-end RFA tender to him, he would be in line for a slightly larger annual salary (around $1.5MM), but it would only be for one season, and would be fully non-guaranteed.

The Cardinals have finalized a series of roster moves today, according to Darren Urban of AZCardinals.com (via Twitter). In addition to signings linebacker Marcus Benard and placing linebacker Matt Shaughnessy on injured reserve with the designation to return, moves which were reported yesterday, the club also signed punter Drew Butler to the 53-man roster, placed punter Dave Zastudil on IR, and signed quarterback Dennis Dixon to the practice squad.

Zastudil, who was hampered by health issues earlier in the season, re-injured his groin during Sunday’s game in Denver, prompting the team to turn to Butler instead. Zastudil will spend the rest of season on the injured reserve list, assuming the Cards don’t release him with an injury settlement at any point.

As for Dixon, his spot on the practice squad is worth noting. With both Carson Palmer and Drew Stanton ailing, head coach Bruce Arians suggested yesterday that if his club were to add a quarterback, it would be one who knows his system. Dixon was a Steeler for several seasons back when Arians was running Pittsburgh’s offense, so the 29-year-old signal-caller fits that bill. If one or both of Palmer and Stanton can’t go this weekend, Dixon would likely be promoted to the active roster.

Butler had previously been on Arizona’s practice squad, so no one had to be cut to make room for Dixon.

Here’s the latest practice squad news from around the NFL..