It looks like Tommy Armstrong has finally received that long-awaited contract from the Vikings. According to Chris Tomasson of the St. Paul Pioneer Press (via Twitter), the team has added the former Nebraska quarterback to their roster. To make room, the team has waived receiver Mitch Mathews. 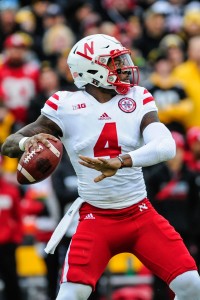 The undrafted free agent participated in the Vikings’ rookie minicamp, although the organization wasn’t eyeing Armstrong as a quarterback. Rather, the coaching staff auditioned the 23-year-old as a running back, and they later shifted him to safety. Despite the apparent versatility, the team didn’t sign Armstrong following the conclusion of minicamp.

Armstrong had a successful collegiate career at quarterback. In 45 games, the four-year player converted 53.3-percent of his passes for 8,871 yards, 67 touchdowns, and 44 interceptions. Armstrong also showed talents in the running game, collecting 1,819 yards and 23 touchdowns on 423 attempts (good for a 4.3-yard average).

Mathews has bounced around the league since going undrafted out of Brigham Young in 2016. Besides Minnesota, the 6-foot-6 receiver also spent time with the Chiefs and Browns. In 41 career collegiate games, Mathews hauled in 152 receptions for 2,083 yards and 24 touchdowns.

The Browns announced that they have promoted quarterback Kevin Hogan and defensive lineman Gabe Wright off of the practice squad. To make room, the team reached an injury settlement with quarterback Charlie Whitehurst, dropping him from the roster. Wide receiver Mitch Mathews was also signed to the practice squad. 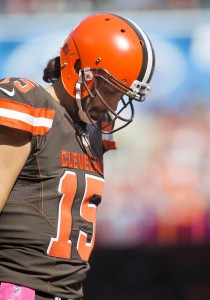 After losing Robert Griffin III and Josh McCown to shoulder injuries during their first two games, the Browns signed Whitehurst to give them additional depth. Cody Kessler got the start in Weeks 3-5, but a big hit left him with serious bruises in his chest and ribs. Whitehurst entered the game on Sunday, but he suffered a knee injury of his own. Now, he’s been jettisoned from the roster in favor of Hogan, a fifth-round pick of the Chiefs in this year’s draft.

Kessler is aiming to suit up for the Browns on Sunday against the Titans. Cleveland is still in search of their first win this year.

Browns head coach Hue Jackson confirmed that the organization has moved on from wideout Josh Gordon. The 25-year-old revealed earlier this week that he’d be putting his career on hold and entering an in-patient rehabilitation facility. It was reported yesterday that the organization was planning on parting ways with the talented receiver.

According to Nate Ulrich of Cleveland.com, Jackson said that he talked to Gordon “several times” about the decision. Otherwise, the coach was more focused on his current, active players.

“Obviously, Josh is not here and doing what he thinks he needs to do for his life, which we support 100 percent. And I think after today, today is really the last Josh Gordon comment I want to make about that. I think what’s best for our football team is that we move forward and move on. He’s not going to be with us, and we wish him well. But we’re moving forward. We’re going to move on.”

Cornerback K’Waun Williams has filed a grievance through the NFLPA asking the Browns to pay for his ankle surgery plus his full $600K salary for ’16, Mary Kay Cabot of Cleveland.com writes. During the offseason, Williams and the Browns were locked in a heated battle as he refused to play through painful bone spurs in his ankle. The Browns suspended the corner for two weeks and later waived him. He was claimed by Chicago, but later released when he failed the physical.