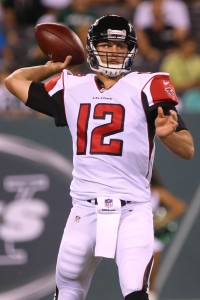 Renfree, 27, never attempted a pass for Tampa Bay, as he’d just signed a futures contract with the club earlier this year. A former seventh-round pick, Renfree spent the first three seasons of his career elsewhere in the NFC South, acting as a backup in Atlanta. His only NFL action came in 2015, when he completed three of seven passes for 11 yards and one interception.

After being waived by the Falcons last September, Renfree spent ample time on the workout circuit, auditioning for the Panthers, Saints, Broncos, Giants, and Bills. He also worked out for the Patriots in early September after Jimmy Garoppolo and Jacoby Brissett suffered injuries.

Fitzpatrick will enter the 2017 campaign as the Buccaneers’ clear backup behind starter Jameis Winston. Tampa Bay also has Ryan Griffin in tow, but none of his $1.797MM base salary is guaranteed, so the club could conceivably part ways with Griffin if it chooses to go forward with only two quarterbacks on the roster.

The Patriots worked out free agent quarterbacks T.J. Yates and Sean Renfree on Tuesday, but they declined to sign either, report Adam Kaufman of CBS Sports Radio and ESPN’s Adam Schefter (Twitter links). New England is content to enter its Thursday game against the Texans with third-round rookie Jacoby Brissett and the banged-up Jimmy Garoppolo as its signal-callers, adds Kaufman. 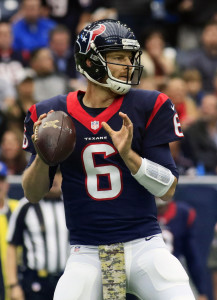 Since Garoppolo had to exit the Patriots’ 31-24 win over the Dolphins with an injured shoulder Sunday, there have been questions as to whether the Pats would add another QB on a short week. Schefter reported Monday that they wouldn’t, and that now appears to be the case after the team passed on Yates and Renfree. As a result, New England could have Garoppolo back up Brissett in his first career start.

Had it signed Yates, New England would have landed a passer with 18 games of regular-season experience and seven starts under his belt. The 29-year-old divided his first five seasons between Houston and Atlanta. He made four appearances and two starts for the Texans last season, completing 28 of 57 passes for 370 yards, three touchdowns and an interception. In all, he has connected on 58.1 percent of 227 career attempts and racked up six scores against eight picks.

Yates, who started both of the Texans’ playoff games in January 2012, went on injured reserve last December with a torn ACL. He received a clean bill of health in August, which could pave the way for him to sign somewhere this year.

Renfree is also a former Falcon, having gone to Atlanta in the seventh round of the 2013 draft. The ex-Duke passer saw his only pro action last year, but he totaled a mere seven attempts.