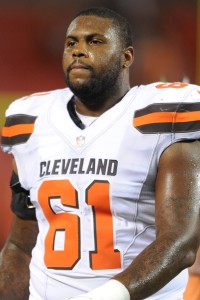 Charges against former Giants offensive lineman Michael Bowie have been dropped, as Mike Garafolo of NFL.com tweets. The Giants did not rule out an eventual reunion with Bowie, so it’s possible that they will circle back to him to help bolster the offensive line.

The Giants cut Bowie in August when the accusations against him came to light. Bowie was involved in an argument with his girlfriend in Oklahoma that allegedly turned physical. Police said Bowie to have grabbed his girlfriend by the neck and threw her to the ground. He also was said to have broken two televisions and punched a hole in a wall in the process. The lineman was facing charges of domestic assault and battery plus two counts of malicious injury or destruction of property, but he’s now in the clear from a legal perspective.

The NFL could still come down on Bowie with a suspension, but the investigative process tends to take a while, so he should be able to play right away if signed by a team.

The Giants are set to meet with Branden Albert this week, so they’re definitely on the lookout for some O-Line help.

Giants offensive lineman Michael Bowie has been charged with domestic assault and battery and two counts of malicious injury or destruction of property following an incident in Oklahoma earlier this summer, according to Jordan Raanan of ESPN.com. A warrant for Bowie’s arrest was issued on Friday, reports Raanan.

Bowie was reportedly involved in an argument with his girlfriend when the disagreement became physical, leading Bowie to allegedly grab his girlfriend by the neck and throw her to the ground, per Tulsa County assistant district attorney Kenneth Elmore. Subsequently, Bowie broke two televisions and punched a hole in a wall.

“We were made aware of the Michael Bowie situation Saturday afternoon,” the Giants said in a statement. “We immediately notified NFL security. Michael will not make the trip for our game in Cleveland as we gather more information on the issue.”

The Giants, of course, are no strangers to dealing with domestic assault allegations against their players, as the club infamously dealt with abuse complaints levied at former kicker Josh Brown. New York didn’t handle the Brown situation correctly, re-signing him to a new contract even after having learned of his ex-wife’s assertions.

Bowie’s episode is unlikely to reach the national level that did Brown’s, if only because Bowie is a reserve lineman fighting for a back-end roster spot. That’s not to dismiss the allegations against Bowie, of course, but the Giants should have a relatively easy time parting with him if they so choose. Bowie, 25, started eight games for the Seahawks in 2014 but hasn’t appeared in a contest since.

The Browns have announced several more roster moves today, but perhaps the most notable transaction of the bunch has yet to be confirmed by the team. According to Mary Kay Cabot of Cleveland.com (via Twitter), the club has waived defensive lineman Ishmaa’ily Kitchen.

Kitchen, who turns 27 next month, earned 279 defensive snaps for the Browns in 2014, making 27 tackles. While his play in the middle was unspectacular, the Kent State product was solid enough in his three years in Cleveland that the team felt comfortable tendering him a one-year contract offer worth $1.542MM when he hit restricted free agency. However, that contract was non-guaranteed.

Here are the rest of the Browns roster moves, which the team officially announced in a press release:

The players who landed on IR won’t return for the Browns this year, while the NFI players will be eligible to practice and play starting after Week 6. The club’s announcement indicates that the roster is now down to 79 players, though that number will dip to 78 when Kitchen’s release becomes official. After that, Cleveland will have to make three more moves to get down to the 75-man roster limit.

A handful of AFC clubs have announced roster moves this morning as they look to reduce their rosters to 75 players. Teams now have less than five hours until 2014’s first cutdown deadline arrives. Here’s the latest: