The four-year veteran will sign a three-year, $21MM agreement with the Bolts. Feiler has worked as a Steelers starter for the past three years.

This move comes hours after the Chargers agreed to terms with Corey Linsley on a center-record contract. Feiler figures to have a spot on the Bolts’ starting O-line as well. Where he lands will be interesting. Feiler has seen time at both tackle and guard, taking over for Marcus Gilbert at right tackle and spending time on Pittsburgh’s interior line as well. Pro Football Focus graded Feiler as a middling guard starter last season but has charted him as an upper-echelon lineman throughout his career.

The Steelers have brought back B.J. Finney but have some major questions up front going forward. They have now lost Feiler and perennial Pro Bowler Maurkice Pouncey, and left tackle Alejandro Villanueva may well be on his way out as well.

Steelers offensive tackle Matt Feiler has signed his one-year restricted free agent tender, according to Dan Graziano of ESPN.com (on Twitter). The Steelers cuffed Feiler at the second-round level earlier this year to ward away other teams. 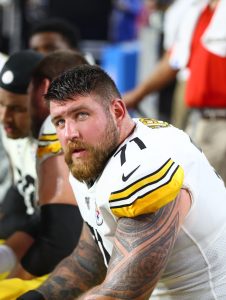 Per the terms of the tender, Feiler is now set to earn $3.27MM this year. If another club signed him to an offer sheet and the Steelers declined to match, that club would have had to forfeit a second-round pick. As good as Feiler is, that was too high of a price tag for other teams.

Feiler, 28 in July, came into the league as an undrafted free agent with the Texans. His time in Houston aside, he’s pretty much spent his entire career in Pittsburgh. Feiler cracked the starting lineup in 2018 and, last year, he was first-string for all 16 of the Steelers’ games. For his work, Pro Football Focus ranked him as the 20th best tackle in the entire league out of 80 qualified players.

With a repeat performance, Feiler could be in line for a much bigger pay bump in 2021.

Besides a brief stint with the Texans, Feiler has spent most of his career with Pittsburgh. The lineman has earned more responsibility each season, leading to him starting a career-high 16 games this past season.

The Steelers have been busy with their impending restricted free agents. Earlier this evening, the organization placed a second-round tender on cornerback Mike Hilton.

Bill Belichick did something he had never done before when he drafted N’Keal Harry 32nd overall in April. During his time in New England, the Patriots had never drafted a receiver in the first round before, so they must’ve been high on the Arizona State product. That being said, Harry won’t be handed anything because of his draft status. Plenty of receivers have come and gone without making much of an impact on the Pats, so Nick Underhill of The Athletic tracked a few of them down to see what advice they might have for Harry.

Underhill talked to 2006 second-round pick Chad Jackson, 2004 fifth-round pick P.K. Sam, and Chad Johnson, who joined the team toward the end of his career in 2011. Underhill asked them about their advice for working with Belichick and Brady and Jackson, one of the Patriots’ biggest draft busts, had some interesting comments. “Some people say Brady’s an asshole, and he can be at times – everybody can be an asshole at times,” he said. “The guy wants perfection. He wants everything done right. I’m sure he makes his mistakes too, but it’s not like everybody else.”

Jackson said Harry will have to be prepared for a lot, and that he wasn’t ready for it. “I think I went to the wrong organization when I first got drafted,” he said. “They expected a lot from you, which is, of course, OK, but I think they put the expectations a little bit higher than for any type of rookie coming in.” All of them stressed that developing a chemistry and a relationship with Brady were important, with Johnson saying he “didn’t really have time to come in and build that currency with Tom.” The whole piece is worth a read, and provides an interesting glimpse into life on the Patriots. Harry should have an easier time than any of those three did, but it’s not a given.