With their secondary in need of a boost, the Panthers worked out cornerback Dee Milliner and safety Earl Wolff on Wednesday, reports Adam Caplan of ESPN (Twitter link). There’s no word on whether the team is interested in signing either. 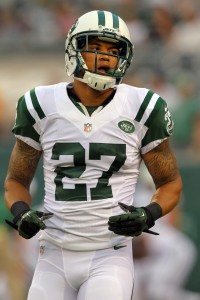 Milliner is the more notable of the two, having gone ninth overall to the Jets in the 2013 draft. The former Alabama star battled injuries and performance issues in New York, though, and tallied just 21 appearances and 14 starts in three years before the club released him from IR on Sept. 28. Between then and his tryout with the Panthers, Milliner hadn’t logged any reported auditions with other teams.

Wolff, a North Carolina native and former NC State standout, hasn’t seen action since 2014 as a member of the Eagles. He spent the offseason with the Jaguars, who removed him from IR with an injury settlement Sept. 7, and worked out for the Chiefs last week. The 26-year-old has 18 starts and seven appearances, all with the Eagles from 2013-14, on his resume.

While it might not come in the form of either Milliner or Wolff, the disappointing Panthers could clearly use defensive backfield upgrades. The team ranks just 19th in DVOA against the pass, 21st in quarterback rating against (94.8) and 25th in yards per attempt allowed (7.8). Things could get worse, too, as 3-6 Carolina will face a slew of talented quarterbacks to conclude the season. Matchups against Drew Brees (Saints), Derek Carr (Raiders), Russell Wilson (Seahawks), Kirk Cousins (Redskins), Matt Ryan (Falcons) and Jameis Winston (Buccaneers) loom for the defending NFC champions, whose playoff hopes are slipping away.