The Patriots and Colts have completed an unexpected swap. According to ESPN’s Field Yates (via Twitter), the Patriots are dealing quarterback Jacoby Brissett to Indy for wideout Phillip Dorsett. 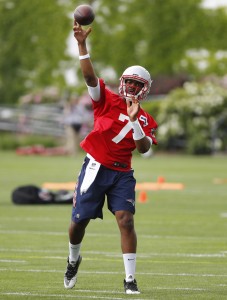 There were whispers that Brissett might not make the Patriots 53-man roster, despite the fact they used a third-round pick on the Florida/North Carolina State product in 2016. The 24-year-old got an opportunity to play during his rookie campaign, starting a pair of games for the depleted Patriots. He ultimately completed 61.8 percent of his passes for 400 yards, no touchdowns, and no interceptions. He also added 83 rushing yards and one score on 16 attempts.

Brissett’s season ended early after he underwent thumb surgery, and he was subsequently placed on injured reserve. However, the second-year player looked fully recovered this preseason, and he threw for 341 yards and four scores during the team’s finale. While Bill Belichick has carried three quarterbacks in past seasons, he traditionally likes to carry a single backup behind starter Tom Brady. With Jimmy Garoppolo healthy and ready to go, the Patriots clearly wanted to carry an extra player elsewhere.

Now, Brissett could find himself thrust into a starting role with the Colts. With Andrew Luck‘s status up in the air for the team’s season opener, Indianapolis might view Brissett as a better starting option than Scott Tolzien and Stephen Morris.

Dorsett had spent his entire two-year career in Indy after being selected in the first round of the 2015 draft. He didn’t live up to his draft position during his rookie campaign, but the 24-year-old showed signs of improvement during his second year in the league. Dorsett ultimately appeared in 15 games (seven starts) last season, hauling in 33 receptions for 528 yards and two touchdowns.

With Julian Edelman out for the season, Dorsett will provide the Patriots with an experienced replacement. Meanwhile, the 24-year-old’s status with the Colts was up in the air. Roster Resource listed Dorsett as the team’s fourth wideout behind T.Y. Hilton, Donte Moncrief, and Chester Rogers. The team is also rostering receivers Kamar Aiken, JoJo Natson, and Quan Bray.