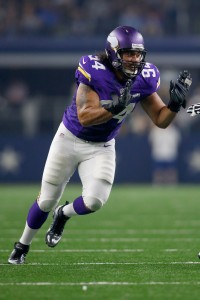 The 28-year-old Trattou joins the Bucs after spending the first six seasons of his career with the Giants and Vikings. Since going undrafted out of Florida in 2011, Trattou has totaled 37 appearances but hasn’t yet started a game. His most productive campaign came with Minnesota in 2015, when he improbably logged more interceptions than tackles (two to one) across five games. He then posted his first 16-game season in 2016, but only 10 of his 280 snaps came on defense. Trattou was third on the Vikings in special teams snaps (270) and is now moving from an ST unit that finished ninth in DVOA last year to one that placed 21st.

Panfil, formerly with Purdue, signed with Tampa Bay as an undrafted free agent in May.

MARCH 18, 12:47pm: The Vikings have officially re-signed Trattou, the team confirmed in a press release.

MARCH 12, 5:24pm: The Vikings have reached an agreement to re-sign defensive end Justin Trattou, as Trattou himself announced on Instagram. Speaking to Chris Tomasson of the St. Paul Pioneer Press, Trattou confirmed it’s a one-year deal. 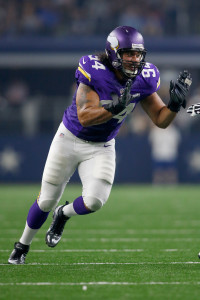 The 27-year old Trattou only managed to play in five games last season as he dealt with a foot injury, but despite seeing just 22 defensive snaps on the year, he somewhat miraculously posted two interceptions. After spending a week unemployed after the Vikings waived him in December, Trattou admitted that he received an offer to join another club, but declined the overture, saying he wanted to remain Minnesota. Trattou, who also plays a bit on special teams, will stay with the Vikings for a fourth season after spending the first two-and-a-half years of his career with the Giants.

Trattou made the veteran’s minimum in 2015, and I’d expect that he’ll be paid the same during the upcoming season, especially given how little he played last year.

The Seahawks inked running back Christine Michael to a contract earlier today, his second stint with the organization. The former second-rounder was traded prior to the season, and with all of the injuries in Seattle’s backfield, he’s hoping his second chance ends better than his first.

“I’m just here to work and give you guys all I have,” he told reporters, including Bob Condotta of the Seattle Times. “That’s all I can do. All I want to do. And I told them just like that.’’

The Vikings have placed running back Jerick McKinnon on IR, ending his breakout rookie season with the team, reports Matt Vensel of the Minneapolis Star-Tribune (via Twitter).

In 11 games this season, McKinnon amassed 538 yards at a clip of 4.8 yards per carry. A third-round pick out of Georgia Southern, he performed well in place of Adrian Peterson.

McKinnon will have a back procedure, with an eight-week recovery time, writes Adam Caplan of ESPN (via Twitter). He should be back in time for offseason workouts.

The team promoted defensive end Justin Trattou from the practice squad to the active roster. The Vikings added safety Ahmad Dixon to the practice squad, reports Chris Tomasson of the St. Paul Pioneer Press (via Twitter).

The void left by McKinnon could open up playing time for Ben Tate, who was claimed off waivers earlier this season, reports Albert Breer of NFL.com (via Twitter).

Listed below are the Sunday roster moves for the four NFC North teams. Following the 53-man roster cutdown deadline yesterday, many teams will make slight tweaks to their rosters, claiming players off waivers or signing guys who clear waivers. Those transactions are noted below.

7:05pm: The Vikings roster is officially down to 53 players, as the team formally announced their transactions in a press release. The following players have been cut by Minnesota:

2:24pm: The Vikings have released veteran defensive lineman Fred Evans on their way down to 53 players, according to Pro Football Talk (via Twitter). The longtime Viking has 94 games under his belt for the team since arriving in Minnesota in 2007, but it seems he won’t have a spot on the club’s regular-season roster this time around. Here are all of the Vikings’ Saturday roster cuts: