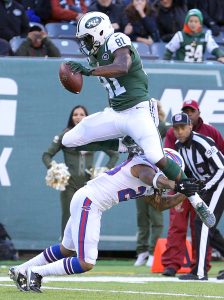 It looks like the Trumaine Johnson era in New York is coming to an end. The Jets placed Johnson on injured reserve today, as well as receiver Josh Bellamy, according to Ian Rapoport of NFL Network (Twitter link).

Johnson was a monster flop in the Big Apple after signing his massive free agent deal, and as Rapoport writes, “it’s safe to say Johnson has played his last down with the team.” Johnson is set to have $11MM in salary for 2020 become guaranteed in March, so he’ll almost certainly be cut by then. All told, Johnson will have received $34MM to appear in 17 underwhelming games for the Jets. New York apparently tried desperately to trade him at the deadline, but couldn’t find any takers.

After having a solid first six years in the league with the Rams, Johnson inked a five-year, $72.5MM deal last offseason. Things got off to a rocky start, and although he picked off four passes in ten games last year, he didn’t play up to standards. He was benched for a couple of weeks earlier on this season before ultimately regaining his starting role, and he clearly didn’t get along well with the new regime in New York.

Johnson has been graded very poorly by most observers this season, and he missed last week with an ankle injury. Still only 29, he should draw some interest on the open market. Bellamy is a former UDFA who had the occasional moment with the Bears over the past few years. He inked a two-year, $5MM deal with the Jets this offseason, but will finish 2019 with only two catches for 20 yards.

After adding Jamison Crowder earlier today, the Jets are signing another receiver. NFL.com’s Ian Rapoport reports (via Twitter) that the team is close to a deal with wideout Josh Bellamy. Rapoport adds that the deal is for two years and has a max value of $7MM (with $2.75MM guaranteed).

The 29-year-old receiver had spent the past four seasons with the Bears, and he finished with at least 200 receiving yards in three of those four years. Bellamy’s numbers took a step back in 2018, as he finished with 14 receptions for 117 yards and one touchdown. The veteran has also proven to be a reliable special teamer, compiling 23 tackles throughout his career.

That’s presumably where Bellamy will make the most significant contribution with the Jets in 2019. After all, the team appears to be relatively loaded at receiver, with Crowder, Robby Anderson, and Quincy Enunwa leading the depth chart.

Today’s round of minor transactions around the NFL is dominated by exclusive-rights free agents. ERFAs are players with less than three years of NFL experience, who don’t have a contract for 2016.

While these players are technically considered free agents, they don’t have any real freedom when it comes to picking their destinations — if their current teams want them back, all those clubs have to do is submit an ERFA tender (typically worth the minimum salary), which precludes those players from negotiating with any other teams.

As expected, the Bears have officially placed wide receiver Brandon Marshall on injured reserve, ending his 2014 season, the team announced today (Twitter link). In a pair of related roster moves, Chicago promoted wideout Josh Bellamy from the practice squad to the active roster, and signed linebacker Jonathan Brown to the taxi squad.

Marshall, 30, left last Thursday’s game against the Cowboys with a rib injury and was hospitalized for several days. The veteran receiver broke multiple ribs and also sustained a lung injury, making it an easy decision to shut him down for the rest of the season, particularly with the club no longer in the playoff hunt.

With Marshall out for Chicago’s last three games, it could open the door for second-year wideout Marquess Wilson to assume an increased role in the team’s offense. Wilson entered the season hoping to establish himself as the No. 3 receiver behind Marshall and Alshon Jeffery, but missed a good chunk of the year with a fractured clavicle.