Defensive lineman Khyri Thornton has been a free agent since the Giants released him earlier this month. However, the 28-year-old will be forced to miss game time if he does indeed sign with a new team as he’s been suspended by the league for 10 weeks, reports Field Yates of ESPN.com (Twitter link). The reason for his suspension remains unknown at this time.

The suspension will go into effect for only the regular season. Should he sign with a new team, Thornton will be forced to miss game action regardless if he agrees to a contract during the last week of this regular season or well into the 2018 regular season.

Thonton has bounced around a little bit this year. He made the 53-man roster with the Lions out of training camp, but could only stick with the team for a few months before he was released in November. The veteran defensive lineman quickly caught on with the Giants before being released again about two weeks into his tenure with his new franchise.

The former 2014 third-round pick has appeared in just four games this year in which he’s tallied only four combined tackles. Thornton was much more of a factor in 2016 when when he played in 13 games, totaling 18 combined tackles, a sack and one forced fumble.

Thornton was signed by New York on Nov. 29 after being released from the Lions but did not appear in a game with the team. The third-round selection in 2015 missed the first six games of the season while serving a suspension for violating the league’s substance abuse policy. He made four tackles with Detroit before being released.

A solid run stopper at Southern Mississippi, Thornton has yet to translate that to production in the NFL. He failed to see the field for the Giants, who own one of the league’s worst rush defenses.

The Lions announced that they have waived defensive tackle Khyri Thornton. Thornton was activated from suspension just under a month ago, but he has not been effective since returning to action.

The bad news may have put a damper on Thornton’s 28th birthday. The former third-round pick will be subject to the waiver wire, but he can sign with any team of his choosing if he is not claimed on Wednesday afternoon.

It’s somewhat unlikely that he is claimed since he has not looked all that great in his four games this year. Then again, teams may be more inclined to roll the dice on him since his remaining guarantees were voided by the PED ban. He’s currently in the midst of a two-year, $3.3MM deal, but he can be released without any real financial penalty after the season.

Last year, Thornton made 13 appearances for Detroit, including six starts. He registered his first career sack and racked up 19 tackles, leading the Lions to give him a new deal.

Lions defensive tackle Khyri Thornton has been handed a six game suspension by the NFL for violating the league’s policy and program for substance abuse. The news was announced by Detroit on Tuesday afternoon.

Thornton, 28 in November, entered the NFL as a third-round pick of the Packers in 2014. It wasn’t until the next year when he finally saw live NFL action with the Lions. Last year, Thornton made 13 appearances for Detroit, including six starts. Thornton registered his first career sack and racked up 19 tackles, leading the Lions to re-sign him to a two-year, $3.3MM deal.

After appearing in 29.9 percent of the Lions’ defensive snaps last year, Thornton was being counted upon as depth for Detroit on the D-Line. The Lions still have Akeem Spence as a backup DT and they’ll also use free agent pickup Jordan Hill a bit more than initially planned. Haloti Ngata, who plans to return for his age-33 campaign, and A’Shawn Robinson figure to start.

The Lions and restricted free agent defensive tackle Khyri Thornton have agreed to a deal, tweets Dave Birkett of the Detroit Free Press. It’s a two-year, $3.3MM pact that features a $325K signing bonus (Twitter link). Michael Rothstein of ESPN.com (on Twitter) hears that the deal is actually worth $3.6MM. 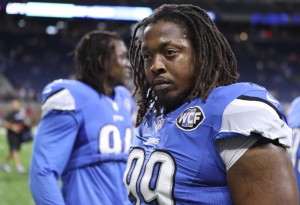 Thornton, 27, entered the NFL as the Packers’ third-round pick in 2014, but he didn’t suit up in any regular-season games with the team. He debuted in 2015 as a member of the NFC North rival Lions, with whom he has totaled 19 appearances. Thirteen of those appearances came last year for Thornton, who made the first six starts of his career, registered his first sack and tallied 19 tackles. Pro Football Focus wasn’t impressed, though, as it ranked his performance 121st among 126 qualified interior D-linemen.

After appearing in 29.9 percent of the Lions’ defensive snaps last year, Thornton should once again serve as depth for the club next season. Haloti Ngata, who plans to return for his age-33 campaign, and A’Shawn Robinson figure to slot in ahead of Thornton along Detroit’s interior line.